In Part 1 I looked at the price of oil, and in Part 2 I explained how the company finds oil and reports it’s reserves. Now let’s move onto the next stage in the cycle, production.

It all starts with drilling a well, a deep hole in the ground filled with a steel tube to allow the oil to pass upwards. When the taps are first turned on so to speak, this is known as the primary stage. Underground there are numerous forces at work which mean oil comes up the well without any real effort and around 5-15% of the oil reservoir can be extracted from the natural pressure alone.

Once this pressure becomes so weak that the oil no longer comes out, the secondary stage starts which creates artificial pressure in the reservoir. This is done by injecting water or gas to force the oil upwards into the well. Around 35-45% of the oil reservoir can be extracted from this stage.

Eventually even this does not yield oil, at which point the tertiary stage starts, the most expensive as it requires hot vapour to be injected to heat the oil underground and increase its mobility.  Around 5-15% of the reservoir can be extracted using these methods.

All together, the reserves that can be extracted from a well are known as the Estimated Ultimate Recovery (EUR).

Given that oil and gas gets increasingly difficult to extract, there is a ‘production curve’ that a well will follow over its lifetime. A theoretical diagram of this is shown below.

In reality the plateau is usually very short, here are some actual production graphs of wells. Take a look at the dramatic falls in the first couple of years which then smooths out. 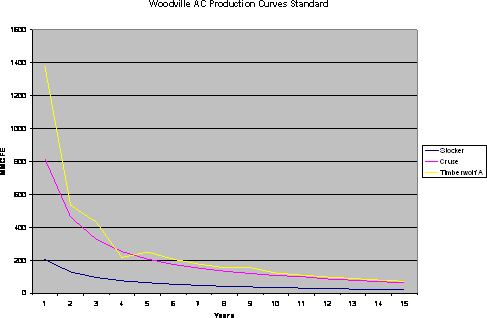 This is very important because in evaluating a company you will want to look at how sustainable its earnings are. If it has a 1 year old well which is spitting out oil and generating lots of cash then you can expect that cash flow to dramatically reduce over the next couple of years so don’t just value it at 10x earnings.

The product and flow rate

Once the oil starts flowing it is possible to determine the Gas/Oil Ratio (GOR). Due to the high pressures underground, natural gas dissolves in the oil and it is possible to extract this, and calculate the GOR. Obviously this determines whether you are producing mainly gas or oil, the benefits of either will depend on the relative prices of oil and natural gas at the time.

The rate at which oil is produced from a well is called the flow rate and is usually measured in barrels of oil per day (bopd or bpd).

Oil companies don’t just operate one well, so it’s hard to forecast production. Oil fields can be tapped by more than one well, increasing flow rates and a company can continue to discover new oil fields. In reality an oil company will continually increase its overall flow rate as it drills new wells but eventually this growth will end. Figuring out when though is difficult.

In value investing we are interested in the downside risk first and foremost i.e. under conservative conditions, what could a companies current reserves and production capacity produce in cash flows in the future. This is how the company can be valued. It can also be valued based upon what reserves it holds on the books and what another oil company would be willing to pay for it. In the next part of this series I will go through how to use what we now know about oil companies and the different metrics to find their value.