For those that don’t recognise the name, Ruger is a brand of gun. There is no need to go into the gun industry and an explanation of the business really, all that needs to be said is that brand is very important when it comes to firearms, and most companies sales will follow general trends in the industry. In the last couple of years gun sales have exploded in the U.S. as the Obama administration’s stance on stricter gun controls has sent people rushing out to buy guns for fear they will soon be restricted. In Obama’s first term alone more guns were sold than under the entire Bush administration. Despite record sales the market is very pessimistic about gun manufacturers in general, RGR trades at a P/E of just 11.2 and Smith & Wesson (SWHC) trades at just 9.6. That is surprising when you take a look at the financial results below. 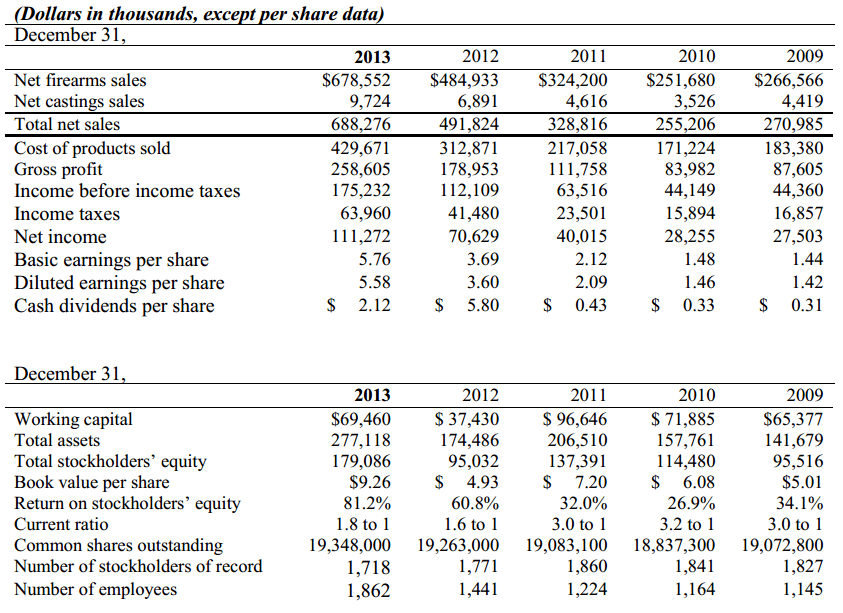 Return on equity is an impressive 62% and earnings in 2013 were over 4 times what they were in 2009. Recent data has not indicated any slow down in the rush to buy guns as recent gun incidents make political rhetoric all the more vocal, but the powerful gun lobbies stop any restrictions actually being put into place.

You may wonder why I have chosen to cover Ruger instead of SWHC which trades at a cheaper price. Well I am more impressed with the management of Ruger. These are some quotes from managements conference calls.

“We treat the distributors much differently than how the other manufacturers treat the distributors and we also demand different behavior from the distributors with respect to Ruger as a consequence. We do not stuff the channel on them. We give them absolute price discipline, so they know their inventory is non-perishable. And that’s not how the other manufacturers treat them. The other manufacturers will have so far behaved in a way that they will look for any deal. They often undercut the distributors and the buying groups can buy cheaper than the distributor can buy or they will stuff the channel without hesitation. And so that – my bigger concern frankly is that can provide some cash flow constraints for some of the distributors that they have got too much of the other guys’ inventory or and it’s slow moving. So we frankly – since we treat them in a much better way we demand better performance from them. I don’t frankly care if they pay the other guy. But they will pay us, they will pay us on time or they are go to be fired because there are some other big distributors who would love to step in and take their place, and they all know it. And frankly they have made volumes on Ruger and they like Ruger and its fun to sell because you don’t have to worry about price. And so I think they are treating us better.

One other – let me add one other thing to that. Remember, we talked about in the past that every two and a half weeks we sit down and plan production based on what has actually sold through. We don’t plan production based on the orders received, we don’t plan it on what will be easier fun or profitable to make. We look and see what the consumers are pulling through the channel as evidenced by the distributor sell-through the retailers and that’s how we decide what to build.”

There is reason to be cautious however; the CEO describes demand in 2012 from retailers as ‘aggressive’ and in 2013 was ‘ridiculous’ although they did not meet this demand and only shipped unit volumes they thought had a realistic chance of selling. The inventory at retailers therefore has remained normal and the CEO’s honesty is refreshing.

I don’t have any opinion on what gun sales will do in the future but this is definitely a company to watch. Back in 2010 when sales were falling, this share traded at a measly P/E of just 8. Shares now trade 500% higher. Clearly the market has been wrong on its bearish calls for a long time and will likely mis-price it again.