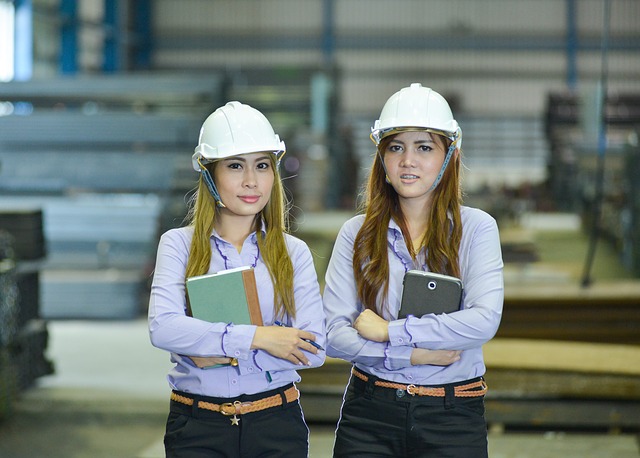 Staffline (STAF:LN) is the market leader in the recruitment and outsourcing of human resource services to industry and services in the welfare to work arena and skills training i.e. blue collar workers. It has just delivered a trading update which confirms it will meet full year expectations for 2017 (net profit £30.2m) which makes its current market cap of £271m attractive (P/E of 9). But it gets even better. Staffline’s net profit does not do justice to its cash generation power, as it has a large amortisation charge which does not reflect true business costs. Its true free cash flow is closer to £40-45m!

The company has a long history of growth, which in recent years has been funded by acquisitions, hence the rapid increase in both revenue and profits. Over the last 5 years, revenues have grown at a CAGR of 25%. 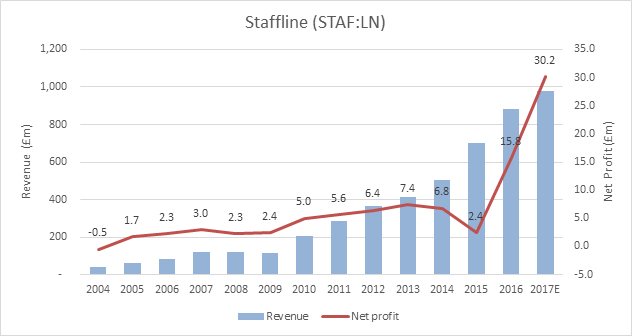 This growth has been funded by a mixture of available cash and debt. Net debt at the last report date was a modest £32m, though that is probably gone now as previously indicated, as it is due to report its 2017 results soon. Net debt peaked at £63m in 2015 after a couple of large acquisitions.

But the growth story isn’t entirely acquisitive. In the 7 years before 2013, it grew net profits at a CAGR of 18% per year.

Staffline’s net profits understate its real cash earnings due to amortisation charges which do not reflect usual business costs. This is amortisation of “customer contracts”, purchased as part of its previous acquisitions, over roughly 5 years. In 2015 this charge was £10m, and in 2016 it was £14m (source: p102 of 2016 Annual Report). To put this in perspective, in 2016 Staffline made a net profit of £15.8m, but free cash flow (excluding changes in working capital) was a whopping £31.3m. Over the next few years, these deductions will disappear from the income statement and provide a boost to reported net profit.

It currently pays a modest dividend yield of 3%, which is over 5x by free cash flow.

The Company has two segments: Staffing Services, which includes the provision of temporary staff to customers, and PeoplePlus, which includes the provision of welfare to work and other training services. Its Staffing Services focuses on providing complete labor solutions in agriculture, food processing, manufacturing, e-retail, driving and the logistics sectors. Its recruitment business operates from well over 300 locations in the United Kingdom, Eire and Poland. The Staffing brands include Staffline OnSite, based on clients’ premises providing both blue and white collar, out-sourced, temporary workforces. Its Employability includes work program, prime contractor in over nine regions and sub-contracts in approximately five regions in England.

It’s important to note that only 16% of Staffline’s revenues come from PeoplePlus, but the segment makes up 53% of its operating profit. It was primarily these businesses which were acquired in the last few years and they are performing well. From the last annual report:

“PeoplePlus has now started to outperform most of our competitors on the Work Programme and seven of our nine prime contracts have achieved top quartile performance during the period.”

Every business has its bad points and this is no exception. Here are some of the things I don’t like about the business

I think the positives of this company outweigh the risk factors, so have initiated a position of roughly 3% of my portfolio.