As the saying goes, a picture can speak a thousand words. This chart pretty much sums up my entire article, and answers the question posed in the title. So I thought I would post the ‘punch-line’ right at the beginning. 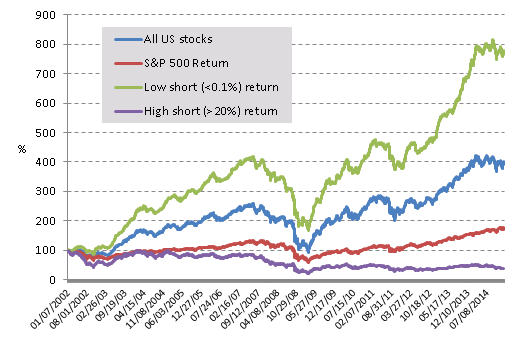 Now let’s rewind a bit. As “investors”, we like to think we have some inherent advantage over most people in the market, which is made up of traders and short term thinkers. We think of ourselves as the rational ones who keep a level head and objective approach even in the midst of fear and crisis. Books like the Intelligent Investor by Ben Graham, and gurus such as Warren Buffett make out like the market as a whole is irrational, disregards company fundamentals and can be taken advantage of. But there is an important point which is easy to miss among this self congratulatory rhetoric, and that is that Mr Market, far from being incompetent, is usually right. It is only on occasion that he is irrational and will offer you the proverbial $1 for 50 cents. In this article I’m going to explore what the ‘short interest’ in a stock tells you from the perspective of going long (i.e. it’s not about shorting stocks).

Most good investors will tell you that they discard over 99% of the companies they look into, and there is a reason for that. Some may be because they are outside the circle of competence, but mostly it’s because the market isn’t undervaluing the company. More often the market fairly or even overvalues them, rather than undervalues them.

In our search for good investment ideas we look in a lot of places to find suitable companies, including stock screens. A popular screen to look for bargains in is stocks with a high short interest. Websites like this make it easy to find them, and they are usually cheap so look very attractive on a fundamentals basis.

What short interest tells you

Short interest is the % of the shares that have been sold short. This means some investors have borrowed the shares, and are paying for the privilege of being short. Such borrowing and selling drives down the price of a stock.

From this we can infer that if the short interest is high, then Mr Market thinks the company is overvalued.

Remember that this is the same Mr Market that overvalues companies frequently, and I would argue has a bias to overvalue and be overly-optimistic on stocks. So when pessimistic on a stock, to the point people are paying for bets against the company, then you’d better take notice, because there is something perceived to be wrong.

What short interest doesn’t tell you

What a high short interest does not tell you is that a share is undervalued, or is even more likely to be undervalued.

But I, and others, were wrong. In fact when it comes to short selling, Mr Market is usually right.

I wanted to test the theory I previously held (that high short interest stocks are an attractive place to look for investments) so I ran backtests of various model portfolios which choose stocks solely based on their short interest.

The first backtest selected stocks that have greater than 20% of the float short.

The second backtest selected stocks that have less than 0.1% of the float short.

The third was just all US stocks in equal position sizes to correct for the bias with comparing to a benchmark like the S&P 500.

All these portfolios excluded over the counter stocks, were reinvested every 4 weeks and contained more than 100 stocks (so not based on small sample sizes). The results speak for themselves.

I then re-ran the backtests with an additional filter to select only companies with a market cap greater than $250m, to see whether microcaps where affecting the results. I also adjusted the low short interest to 0.5% to keep the sample size up. The returns did converge slightly, however the pattern is the same. 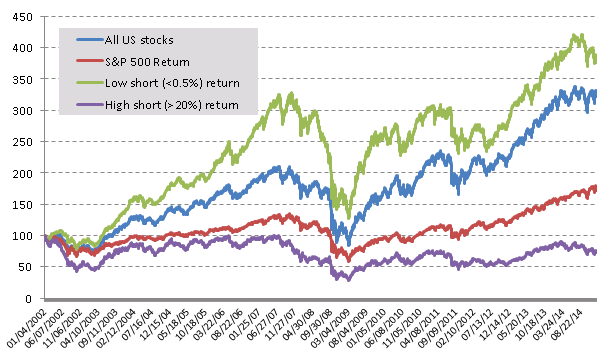 The pattern also holds true when the ‘high short’ threshold is changed to 10%. Though returns do increase slightly, it is still below the S&P 500 returns.

What does this mean?

Does this mean that you should never buy a share with a high short interest? Strictly speaking I would say no, but your average investor would clearly do well to avoid them as a rule. I would say this means that if you are buying a position that has a large short interest then you need to have a very good, concrete reason, and not simply choose to ignore rumors, even if they apparently have little factual basis. Understanding the reasons for high short interest has never been easier, with websites like Seeking Alpha usually already having articles spelling out the short thesis on most heavily shorted stocks. For the rest, searching the news using Google will often allow you to quickly understand the pessimism around the shares.

So does this mean you should only buy shares with a tiny short interest? Again I would say no, but avoiding any meaningful short interest would serve the average investor well.

The main lesson I personally will take from this analysis is that searching heavily shorted stocks for investment ideas isn’t a great use of my time, and excluding heavily shorted stocks from my screens will probably allow better, more focused investment prospects. The group of shorted stocks likely hold fewer good investments than the market as a whole, and if their problems could be ignored or explained away then the market would have already done it. I, as an individual, am unlikely to have a unique insight on a company’s situation, and the same probably applies to you as well.

7 thoughts on “What does Short Interest tell you?”