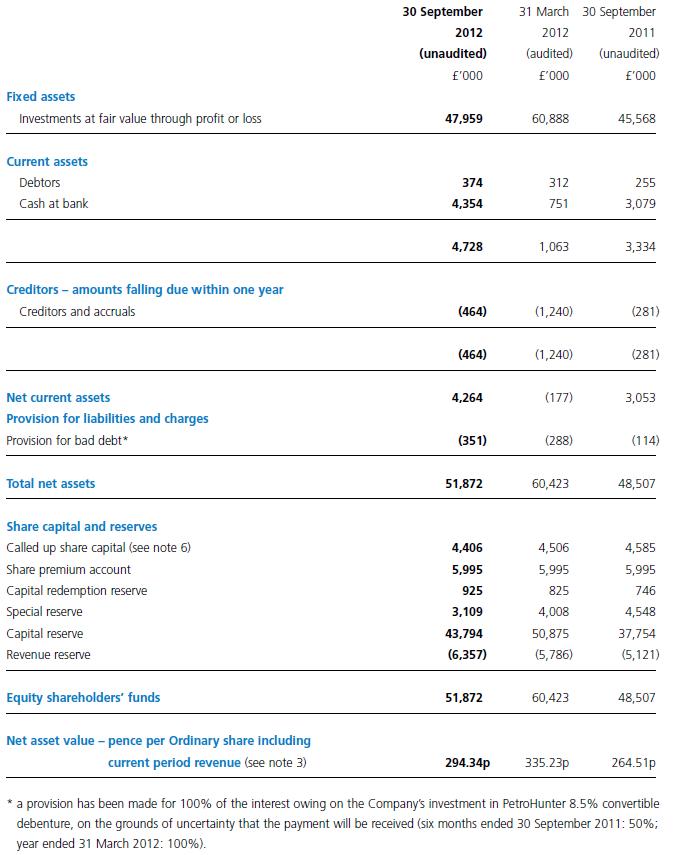 Renaissance Investment Trust (LSE:RUG) came up in one of my stock screens for shares selling below tangible book value per share. While it isn’t unusual for Investment Trusts (ITs) to sell at a discount, RUG sells for a huge 28% discount (i.e. a 40% upside). If that alone isn’t enough to interest you, I have more!

The fund has continually sold for a discount of around 20-40% over the last five years and finally shareholders have had enough. There are a few major shareholders that expressed their wish to wind down the fund and return cash to shareholders. This was approved at the recent Annual General Meeting. They expect to distribute a bulk of cash by the first quarter of 2014, with a full wind down by a couple of years (you can read the details here).

“The Manager aims to realise the portfolio and return cash proceeds as quickly as possible given the Board’s sensitivity to the ongoing costs of running the portfolio. The Board and the Manager believe that the portfolio may take in the region of two years to be fully realised but expect that an initial distribution of cash will occur by the first quarter of 2014.”

The first place to check in these situations is the balance sheet. What kind of investments do they hold that could possibly explain this level of discount? The latest balance sheet is below, although is now quite old.

The one thing I note first is the bottom line, NAV per share. The current NAV is 323p and share price is 231p. This investment is subject to market risk as we have a 24 month time period of winding down the fund. We are currently at a high point in the market by many standards. But seeing that in September 2012 the NAV was 294p were market conditions were less exuberant gives me some confidence that the margin of safety here is adequate. Even in September 2011, it’s NAV was 261p per share.

Overall the balance sheet is rather boring, and that’s good. If it wasn’t boring we’d have found something dodgy. So next I guess it’s time for the most important part, the portfolio. Its top 10 holdings as at 31st January 2013 were as follows:

This accounts for 83% of their portfolio in total. Most holdings are in quite high growth areas, which may be deemed more “risky”.

What is most interesting however is the unquoted holding in AnchorFree. This is what initially interested me in RUG, as it hasn’t been revalued on the balance sheet in a year, and my efforts to find financial information on the company have been in vain.


AnchorFree produces Hotspotshield, which is a VPN program that hides you and connects you to one of their servers somewhere else so your internet privacy is protected. It’s increasingly popular in countries such as China where the state tries to control the use of the internet, but also in the West for privacy conscious people.

According to Wikipedia, it has been profitable since 2009, and we can assume is very high growth. It has 100million monthly users, only launched in 2005.

The March 2012 revaluation was based on an investment by Goldman Sachs, read about it here. This investment reminds me a lot of Facebook, we are still at the early stages were only a select few in the investment banking arena are able to get in. RENN were one of the very early investors and have already seen a return of 1000%! In the latest interim report, the management disclosed they sold 16% of their holding in AnchorFree as part of the Goldman Sachs deal for $5.3m.

So what is it worth now? Well I’m going to take no bad news as good news. I can see no negative press coverage of the company and things seem to be going well. I can see no reason why it would be valued lower. Could it be higher? Of course! But will they find a buyer? It’s possible they will find it hard, and have to sell at a lower price but it’s unlikely in my opinion.

There are a few other little nuances that I came across in my research. First is that the fund manager is being switched from assets under management fee to fixed monthly fee. In one sense this is good because it could speed up liquidations, he has no incentives to hold on to positions to maximise fees. On the other hand he now has incentive to draw out the process for as long as possible, and no incentive to maximise shareholder returns.

Also, at some point in the future it is likely this company will become unlisted. So your capital will be tied up until the company is fully liquidated and the proceeds returned to shareholders. That isn’t a problem but should be considered by investors that may need to retain liquidity of their portfolio.

Finally, this Investment Manager is nothing to write home about. I wouldn’t expect any NAV rises beyond general market movements. Without the AnchorFree investment the returns on this fund would have been dire. Don’t expect the portfolio to suddenly increase in value, I would be more inclined to expect the opposite!

Taxes – I’m no expert in tax, and depending on how this liquidation occurs, it could leave some people (particularly higher rate tax payers) with a tax bill. If you have an ISA, use it. If you don’t or you do not live in the UK then I suggest you research the tax implications for yourself. If cash is returned as a dividend it could be subject to income tax.

Overall, the upside for Renaissance Investment Trust appears to far outweigh the downside in this case. The discount to book value more than accounts (in my opinion) for the risks of a market decline, and difficulties in selling their unlisted security. The AnchorFree holding is a third of the portfolio and is crucial to this investment. But it could offer significant upside. You would expect Goldman Sachs to be clued in when investing in a company. Given the 2 year time horizon we could be looking at an annualised return of 20%. Not spectacular but attractive enough for me to buy in.

Disclosure: I am building a long position in RUG between 5% and 10% of my portfolio.