I just realised I never posted my H1 2018 portfolio review even though I had written it, so I’ll combine it with an H2 report.

2018 has been a year to forget for me, not just because of poor performance of the stock markets, but personally has had a lot of downs. There have been good moments though and I have to keep that in mind. One of those, I guess, was the markets in the first half of the year.

My holdings returned 0.9% from Jan-June 2018 versus 3.5% for the FTSE All share tracker and 4.3% for the S&P tracker. Not great but not bad either. I don’t expect to beat the market when it is particularly buoyant. That flattens out my long term returns.

My portfolio then lost 11.7% in H2 2018 versus -10.4% for the FTSE-All share and -10.3% for the S&P tracker. My under performance looks better when compared to the FTSE 250 losses of 13.9% but are still disappointing as they were driven by a couple of poor performing stocks.

I’m still out-performing the indices in the long term CAGR so that’s something.

So it’s time to dive into my portfolio to see where the gains and losses came from. Here is a breakdown of the contribution in percentage points to my portfolio return. Check out my portfolio page to get tickers and info on my buy prices. 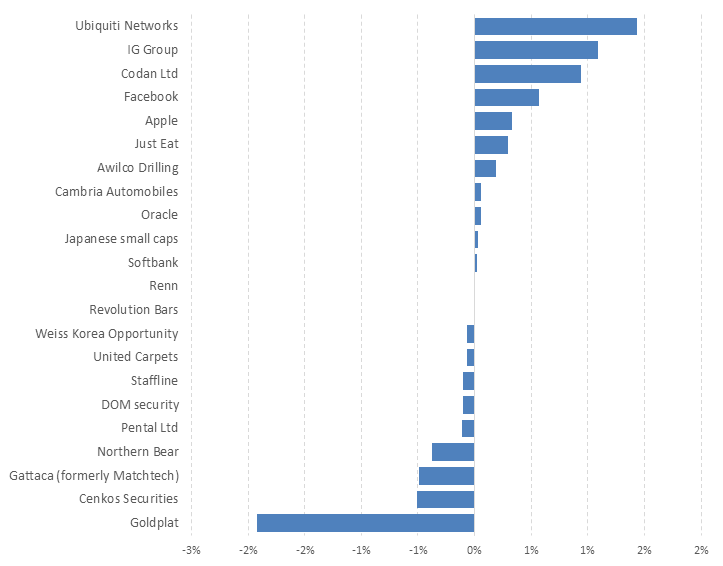 I’ll focus on the positives first. The biggest contributors were Ubiquiti, IG Group and Codan. I since amended my portfolio for two of these in the second half of 2018. Ubiquiti was 7.7% at the end of H1 2018 and was approaching what I deemed to be a fairer value (but with some way still to go). So I trimmed the holding by selling half for a 267% return, or 43% annualised. Codan I sold out of completely as it reached the top end range of my valuation, for a 318% return, or 44% annualised. IG ended the half 64% above my purchase price and was approaching what I thought was a fair enough price, but it’s a long term holding so I have maintained the position (at my expense as it was a big loser in H2).

Staffline again performed well and was the top gainer, up 28%. Apple gained 10% and I sold it during the half as I thought it had reach fair value and just couldn’t see where the future growth would come from. I also sold Oracle after growth had been poor and I thought, given that, it was fair value.

During the first half I became disillusioned with Gattaca and sold my holding, realising a 43% loss. I didn’t really understand the industry they were in and had second thoughts with regard to the debt load. I thought Staffline was a much better play in this industry because of accounting methods hiding its true earning power. I’m glad I sold Gattaca as it’s down a further 47% since I sold.

Another loser was Cenkos, which has furthered its losses in H2. I doubled down on this position as I think it’s a stable option with very low chance of losing money in the long term. It is now 4.7% of my portfolio.

United Carpets was the biggest loser for me. After the stock dropped I doubled down on the position. It has since put out a profit warning and the shares have been battered. After topping up my holdings it’s still down 41% on my average purchase price. I continue to hold as I think the recent poor performance is genuinely due to the abnormal weather the UK had in 2018 (as management stated) which probably won’t be a new long-term norm.

That leaves me with biggest stinker in my portfolio, Goldplat. It further extended losses from H1 to H2. In hindsight, I think this reached its fair value in 2017 when it topped 8p, and due to gains made up 8.4% of my portfolio. It has now sunk to 3.75p, well below my purchase price. I’m content to keep holding but will probably sell when/if it hits 8p again. It isn’t worth my original valuation of 14p in my opinion but is worth more than its current share price.

I am just going to cover all the changes I’ve made in 2018, as I can’t remember which occurred in H1 or H2.

My UK exposure is now quite high, especially to troubled sectors. If the UK economy ends up going into a tailspin after Brexit then I think a few of my positions will fare poorly. But I believe in the long term health of the UK, and that my exposure is to companies that are not as threatened by online innovation. Buying carpets for example I think will be about physically going to a shop and inspecting the choices. Plus, United Carpet’s main competitor is already in financial trouble and will fold before them, reducing competition. Coupled with its financial prudence, this made me increase my position until this was the largest holding in my portfolio. Its losses since have reduced the size however.

I still have around 15% cash to utilise. I will probably use this to top-up existing positions if markets continue to decline. I’d be keen to top-up on IGG, CNKS and STAF.