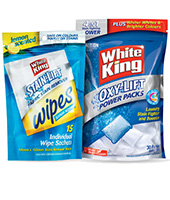 A post on OTC Adventures originally got me interested in Pental Limited. It is an Australian consumer goods company trading at a cheap valuation. It previously had a large speciality chemicals business which was disposed of in 2013, which means its financial history isn’t what it first seems by looking at the company statements alone. My interest was widened when I noted that a member of the board personally holds almost 20% of the company, but isn’t chairman or CEO. So I went back through the annual reports to get a history of the profitability of the consumer goods business alone, which is what the current company consists of. 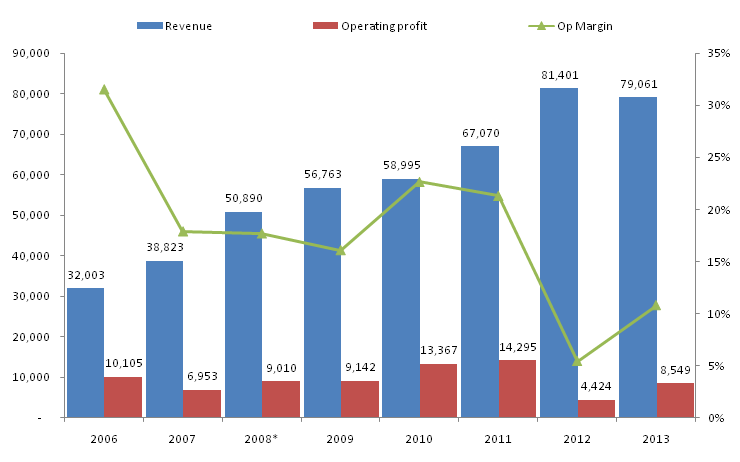 *net revenue before 2009 is estimated as sale rebates and discounts are not disclosed, only gross sales.

Note that these operating profits do not include corporate overhead. Initially, revenue growth was strong although this did not improve bottom line results. This suggests unprofitable growth and it is good to see management have recently reversed this trend. Revenue declined slightly in 2013 however profit increased as management chose not to renew business with unprofitable partners. Operating margins are still slightly below the historical norm, however the first half of 2014 has seen margins increase further, EBIT was up 22% to $3.9m and the historical results suggest this could be maintained. Even if the second half is flat year on year they are in line to earn an EBIT of $9.2m in 2014.

Growth in revenue has been 13.7% per year since 2006, however this is not all profitable and includes some acquisitions so I don’t think it is prudent to use this as a growth number going forward. The 2013 annual report says

“The extremely competitive market conditions are expected to continue into the foreseeable future. while Pental has a solid brand portfolio, competition for shelf space and pressure on pricing is unlikely to subside.”

2014 has also seen a return to revenue growth, but it is hard to know whether this will continue. Management has been focussing its efforts on profitability for the last few years so it may be reasonable to expect growth to return once management is focussed on it. Yet I am not one that likes to rely on optimistic future outcomes. Let’s say at the least that the companies earnings grow modestly over time along with inflation – after all it is a consumer goods company and if they can’t increase prices with inflation then what good are they? At a modest 2% growth rate they are worth a P/E ratio of around 13 at a discount rate of 10% (using my PE calculator).

A more optimistic scenario may be growth at 8% for the next 10 years, that would value it at a P/E ratio of 19. But I question how likely this is. Many of Pentals brands already dominate in terms of market share, for example White King holds an 80% share of the Australian Bleach market and other market shares are around 60%; that doesn’t leave much room for growth, they instead need to create more products in order to grow.

The net debt picture has improved dramatically over the last couple of years. It now stands at just $4.7m, putting finance costs sub $500k a year. Along with a tax rate of 30% this gives an estimated profit after tax of $6m going forward. At the P/Es of 13-19 that values the company at $78m-$114m, compared to the current market cap of $48m (forward P/E of 8).

But lets not forget, this segment was once earning $14m EBIT a year, if it could return to that level of profitability, that translates to a profit after tax of $9.5m with the new low debt position, so would value the company at $123m-$180m.

Pental relies heavily on two supermarkets in Australia which dominate the market and have been looking to introduce their own private label ranges. If either of these supermarkets stops buying Pental’s products it will be disastrous. In total, 4 customers account for over 85% of Pental’s revenue which is a little too concentrated for my liking, but a necessary evil now that retail is dominated by a few big names in most countries.

This company has many similarities to P&G and Unilever except on a much smaller geographical level. That means its more risky, but does it deserve to trade at such a depressed multiple when Unilever is trading at a P/E of 19.4? I don’t think so.

But this isn’t quite as attractive as it first appears – it has this huge options load overhanging it. The current share price is $0.027, so most of these options are technically anti-dilutative, but they do create this big barrier at the $0.03 level. It also reduces my margin of safety for the baseline case to just 25%, however that was a conservative case.

Still this isn’t without risks, particularly managements warning that the landscape is competitive and unlikely to change. With concentrated customers they can’t fight too hard on pricing without risking the business. But I still like the company and will protect myself against the risks by making it a smallish position size of 4.5% of portfolio.

Disclosure: Author intends to initiate a long position in ASX:PTL