It’s that time of year; everything seems to be winding down, everyone is looking forward to a well deserved break over Christmas and time becomes scarce as free moments are taken up with shopping for gifts, writing cards to relatives you haven’t spoke to all year, and of course, eating all those cakes and mince pies. It is a great time to look back over the year and contemplate the good times and the bad times, to hopefully learn some new lessons for next year.

For the purposes of this article, I’m going to focus on some of the companies I’ve followed this year, who’s stock prices have rocketed. Unfortunately for me, I have either sold too soon, or not bought at all. I’ve tried to hold back the tears while writing this.

This is an investment I made before I started this website, so I never wrote up about the business. But it was one of my best investments during 2012, returning 76% in just a few months. It was one of those classic situations of a good business going through a temporary problem (or in SGP’s case, 4 temporary problems one after the other!) which causes a temporarily depressed stock price. This was a stock that traded at a Price/Earnings ratio of over 30 just a year before I bought (after its P/E ratio plummeted to under 10). So you may wonder why this is included in ‘The ones that got away’. Well the chart below sums that up pretty well. 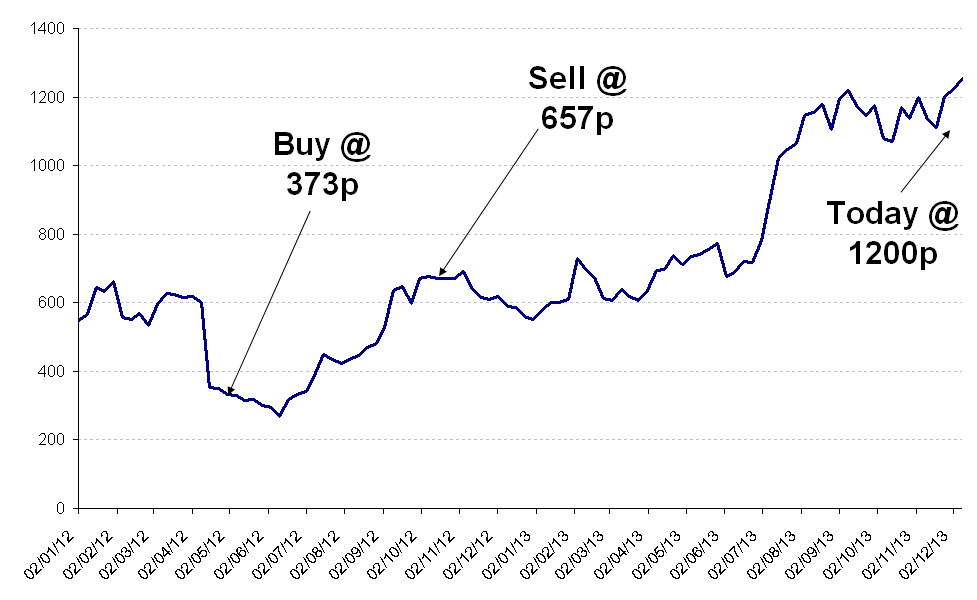 A bit of background: Supergroup is a clothes retailer, currently very fashionable with young men in particular, and its products sell at premium prices and in department stores alongside brands like Hugo Boss and Calvin Klein. It has nowhere near the same brand strength as these, which is why I sold the stock when the P/E ratio was at around 15 which I felt was fair for a retailer that could go out of fashion at any point. Take for example the brand FCUK, this was popular in the early 2000s much like Supergroup. Today it is a struggling retailer with a declining customer base and it was always in the back of my mind that the same could happen to Supergroup.

Supergroup today is much the same business it was when I sold, earnings are expected to grow 28% next year and 15% the year after. It now trades at a forward P/E ratio of 22. Despite missing out on a 250% increase, I don’t feel I made a mistake selling so soon, it could still hit headwinds at any point and I wont be surprised if it is another struggling retailer in 10 years time.

I covered DECK on the site back in March, another stock in the retail sector and much like Supergroup, they have a strong product that is popular with consumers. I originally bought the stock after raw material cost problems had eaten into gross margins and later bought another tranche after the share price fell further. 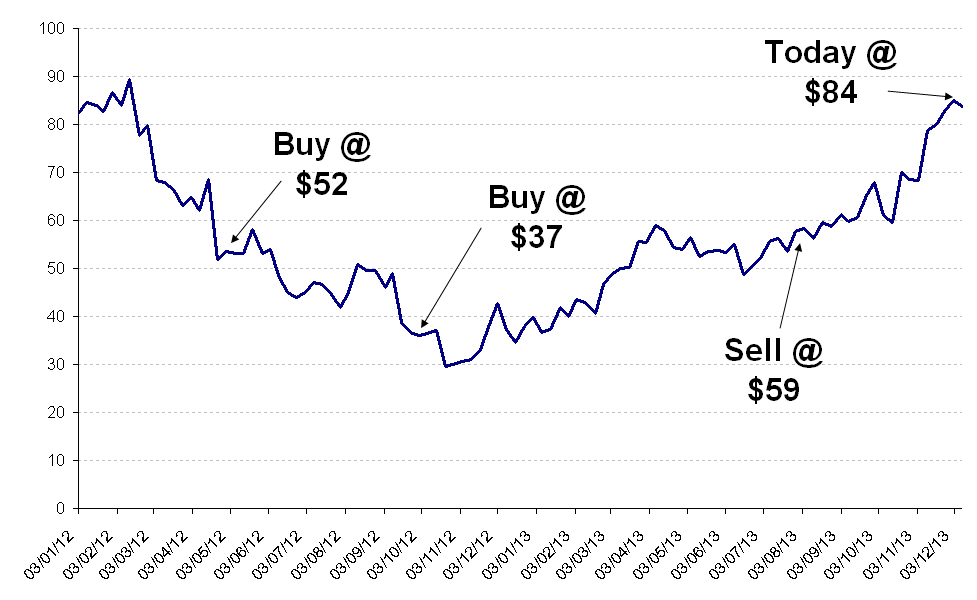 I regret my initial purchase of DECK; of course this could be biased by hindsight, but I paid around a P/E ratio of 15 (on depressed earnings) which isn’t as cheap as a lot of the stocks I have owned since. I also bought too aggressively early on which meant my averaging down wasn’t as effective as it could have been.

The stock now trades at a forward P/E ratio of 21.4 and earnings are projected to start growing in the low double digits over the next few years (but earnings will still not reach previous highs for a while). I actually think the company is still fairly valued, it still has good potential for growth and I believe the brand does have the ability to survive long term. I was quite frustrated with DECK and its poor performance for so long that I may have been too hasty to sell it. I think both the purchase and sale of this stock have taught me that I need some more patience, the market doesn’t move as fast as we think sometimes.

This is probably the bitterest pill for me to swallow. I had actually forgotten all about Senvest until out of the blue someone commented on the article I had written on it a few months ago. I had done everything right, found the stock, researched it and even found some odd accounting irregularity that had inflated results. The only thing I didn’t do was buy the stock! Well guess what happened. 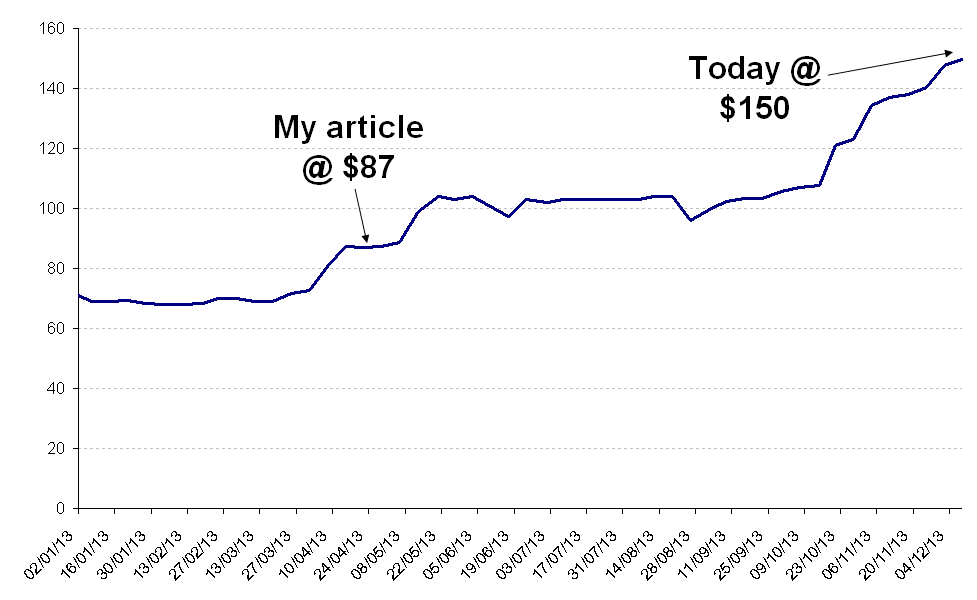 I can barely remember why I didn’t buy; I have vague recollections that my broker didn’t offer the stock (but I’ve since switched) or that with hustle of life I simply forgot about it. Whatever the reason, missing out on a 72% gain on a low risk investment like this hurts. I definitely need to more actively use my watchlist and add stocks immediately that I want to buy. Good ideas don’t come around that often, so to miss one like this for no reason other than carelessness is unforgivable.

I didn’t do a full post on this, it was cheap, but I rejected the stock based on their limited number of customers. That is still true, but hasn’t stopped the stock price from rising. 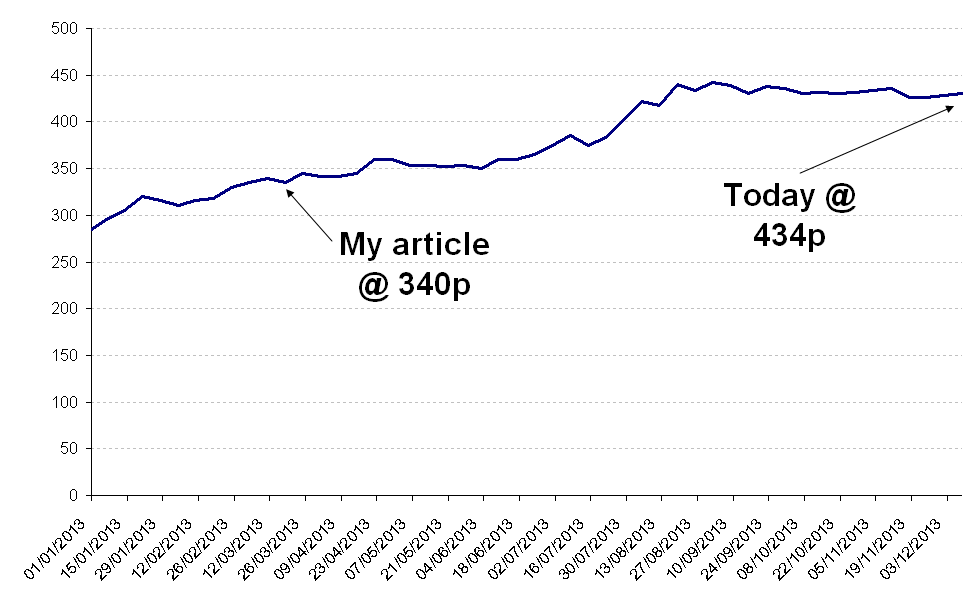 I can’t completely regret not buying this stock, I still think my original rejection is justified, the fact it hasn’t affected the business doesn’t mean it can’t in the future and I only invest in low risk businesses. In the back of my mind though, I sometimes wonder if maybe a small position in these types of companies would be justified, if the risk is diversified it may produce good returns. It’s something I will continue to think about in future.

I also covered this company in the same post as Hilton Food but I rejected it because I didn’t think I could understand the business. Here is how the price performed. 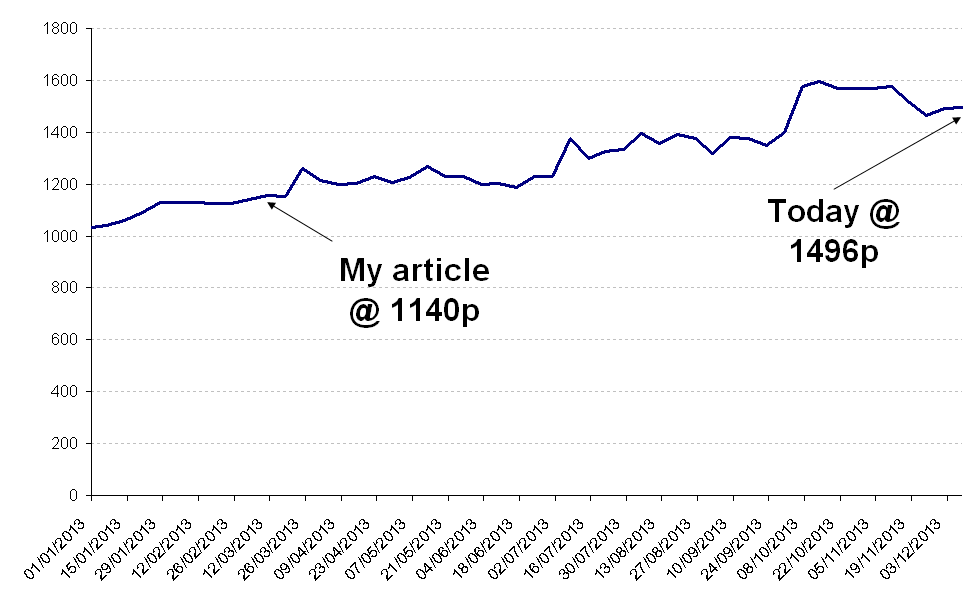 OK, so my omission wasn’t too costly, but I think I was too hasty to decide I wouldn’t understand the business, I didn’t even try it was just laziness if I’m honest. I have got better at this over the last year but it’s something I need to continue working on, making more effort to expand my knowledge.

There are two important things I will note and end on. The first is that this year has seen a huge rise in the price of equities, this can fool us into thinking we missed opportunities when in fact their prices have increased only as a result of the tailwind of the overall market. Secondly, this is only half the picture, many of the stocks I covered and rejected haven’t done well, and only by reviewing both sides can performance and decision making be evaluated. So in the next article I will review the ‘Lucky escapes’ I had in 2013 where I avoided losing money.

1 thought on “The ones that got away”