For anyone that keeps track of the news Apple is surely on their radar. It has had high profile hedge fund managers going after its huge war chest and its share price performance has been dire. Many value investors have added it to their portfolio. Although I normally shy away from tech companies due to the tendency of businesses to go in and out of fashion, Apple appears to have gone to a level were it could be undervalued, even accounting for the inherently risky business it is in. Moreover Apple has now developed what appears to be a devout following which gives it an interesting competitive advantage. It also gets headline news for new products, this is an enormous free advertising campaign and explains their rapid sales growth on release of new products.

But of course more analysis is required before committing to a buy. This post summarises my analysis of the company.

For such a large business, Apple is re-markedly simple to understand. It has a limited range of products which sell in large quantities at high margins. New models are released frequently with improved features which produces ongoing revenue. Their products and associated sales are 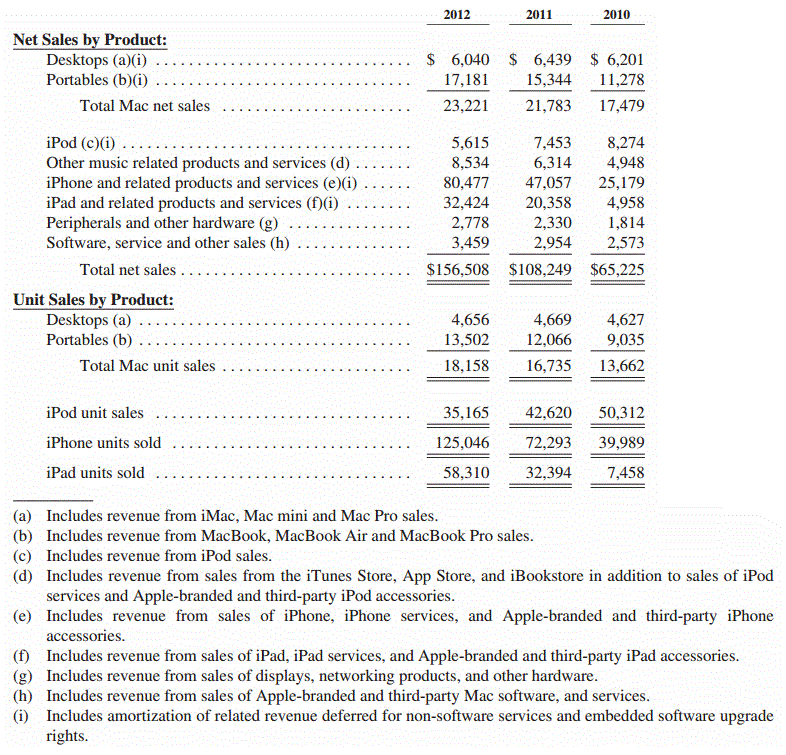 The lions share of sales come from Macs, iPhones and iPads. iPhone accounts for over half of revenue and together with the iPad is the main driving force behind the large increase in sales over the last couple of years. With the launch of the iPhone 5 and strong sales of earlier models which have become available on cheaper tariffs sales have increased dramatically, but can this continue? I don’t think it is safe to assume it can, but it would not surprise me if sales did continue to rise.

Future products at the moment are mostly speculation, but more often than not are based on something so it’s useful to see if there is anything interesting on the net. I’ve seen talk of an iWatch on the web, an Apple television (not just the Apple TV box they currently have) as well as the iPad Mini which has already been announced. Could these products provide sales growth? I think so, an Apple television certainly sounds like it could fill a gap in the market, a TV that seemlessly interacts with the internet and other devices without a lot of hassle.

I’m going to start first with the balance sheet, and take a look at the cash Apple has sitting on the sidelines to assess how much is there and how safe it is (minus any repatriation taxes that would be due). Their last 10-Q filing showed assets of

For repatriation tax, it is hard to estimate how much to discount by as they do not disclose how much is held offshore. Roughly 57% of operating profit in 2012 was from outside the US, therefore we could reasonably assume that 57% of the $137.2bn is held off shore (likely to be an overestimate as overseas sales have been increasing). This means that $78.2bn is subject to repatriation tax (at approximately 35%) leaving $110bn in total to disburse to shareholders.

Now onto earnings. Free cash flow over the last 5 years has been roughly 110% of earnings. This is mostly due to revenue being deferred, a common occurance in technology companies that sell software, as it is advantageous tax wise. However it is mostly due to free software updates so there is no obligation on the company, it is not restricted.

Tax going forward: We also need to account for the fact that future foreign earnings will also be subject to repatriation tax and are currently overstated. This reduces foreign earnings by around 35%. So adjusting for FCF being 110% of earnings and tax on foreign earnings changes 2012 net income from $41.7bn to $32.6bn.

Can these earnings be sustained? This is the difficult question, and I personally think the industry is too uncertain to allow me to produce any meaningful discounted cash flow models. There is a good chance that sales and income could increase in the next few years, but after that they could see a long term sales decline. Putting some example numbers into my price earnings ratio tool, say 15% growth for 5 years, then 20% decline for 5 years and no earnings afterwards gives a PE ratio of 8.4 at a 10% discount rate. But that’s just one of so many possible outcomes and is fairly meaningless.

Share dilution: One thing to always beware of when calculating free cash flow is that it doesn’t take into account dilution of shares. On average over the last few years the share count has increased by around 1.5% per annum. This should be factored into the discount needed as our share of earnings diminishes over time.

Current Price: Apple has a market cap of $424bn, which deducting $110bn of funds available for shareholders gives a value of $314bn to earnings, or a PE ratio of 9.6 based on my adjusted earnings of $32.6bn. Just taking this valuation for a second, this does appear to be quite attractive for a company with such a strong brand as Apple. They have become more of a designer brand than a technology company and their integration strategy of providing great functionality has worked very well.

But if we also look at the future possibilities, I have assumed the repatriation tax will be paid, however there are solutions in which this can be avoided. Suggestions of preferred shares issuance have been made. There is also strong pressure from high profile hedge fund managers for Apple to disperse its huge cash pile. This could be a catalyst for unlocking value.

There are also numerous product launches on the horizon, Apple has quadrupled its sales in the last few years alone, it is able to create new markets entirely, there is a strong likelihood it could continue to do that in the future. Even modest sales growth in the future would make it undervalued at present. I’ll be thinking on this over the next few days/weeks and may add a position