I use the word ‘interactive’ loosely here, I want readers to join in with this case study and don’t be tempted to look up any information that I don’t present here. I came across a company which I thought would make an interesting case study – it is one where a high amount of debt is in play – which I usually pass on and know that I have a very bad track record of valuing properly. So for me this is an exercise hopefully in expanding my circle of competence, I’ll value the company, see how badly wrong I was, and where I can improve.

The company I’ve chosen is Tenneco and I’ll act as if I had come across it in early 2010, in the depths of the Great Recession. I do not know what happened to this company except that it is still around today. The great thing about case studies like this is you don’t have to wait to see if your thesis played out, results are available immediately!

Going back in time

It’s March 2010, and the stock market has rallied from hitting a bottom in 2009, but who knows whether it will fall again. Tenneco is one of the world’s largest producers of automotive emission control, ride control products and systems – so is linked to the cyclical automotive industry which has obviously taken a big hit in the last couple of years. It has just published its 2009 Annual Report and its 10-K. Revenues are down from $6bn to $4.6bn and for the second year in a row it has posted a net loss although at a very respectable level considering the huge decline in revenues. Summary financials are below. 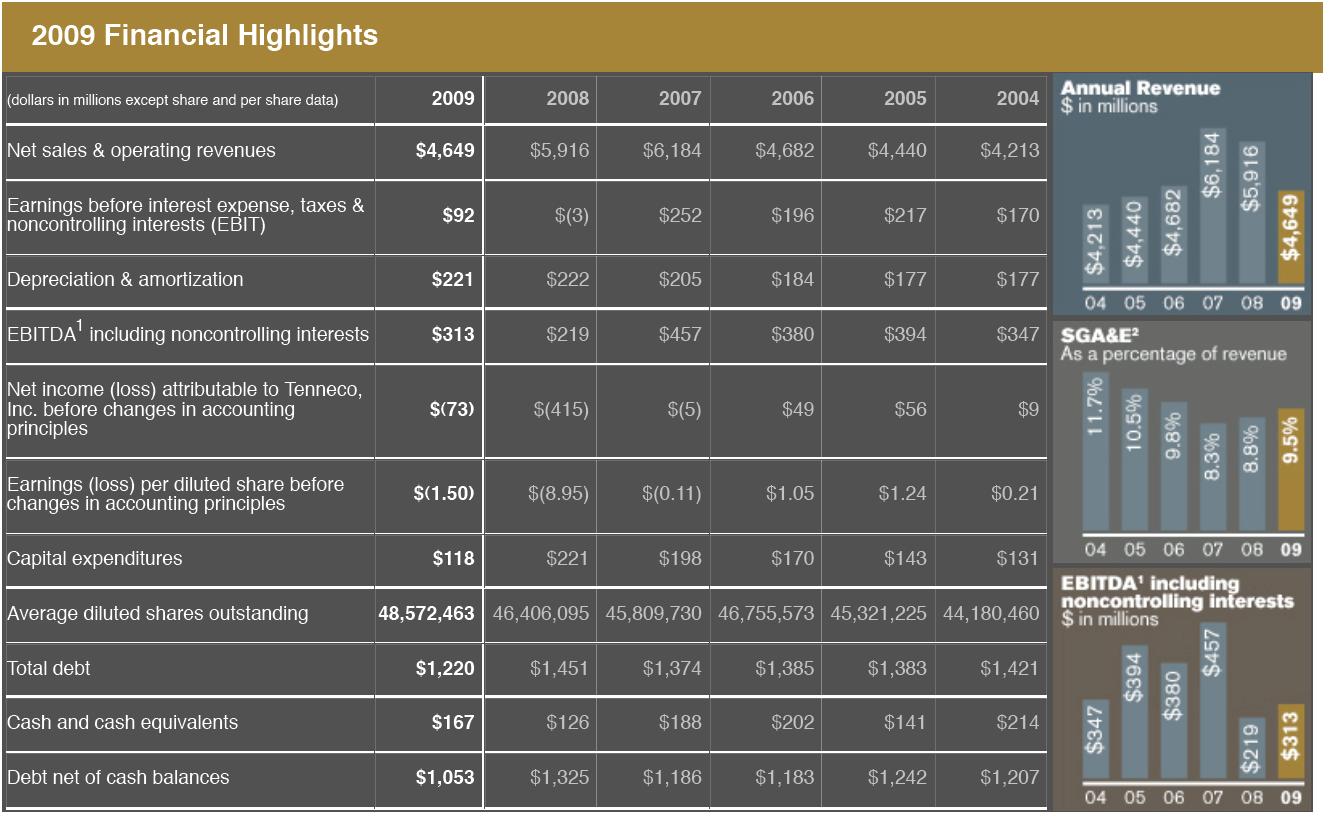 Net earnings don’t cover interest payments which using classical Ben Graham standards of earnings at least 2x interest (in times of depression included) means this company isn’t investable. But that’s why I wanted to continue and analyse this company. Net debt decreased by almost $300m to its lowest level in the last 5 years. Management has done well to manage cash flow and cut capital expenditure and is acting in a very prudent way.

The year 2007 strikes me as odd because of the large increase in revenues so lets check the 2007 10-K and find out what happened. Here is managements quote

“Total revenues for 2007 were $6.2 billion, a 32 percent increase compared to 2006. Excluding the impact of currency and substrate sales, revenue was up $552 million, or 15 percent, driven primarily by volume ramp-ups on platform launches in North America, and higher OE revenues in Europe and Asia, more than offsetting lower aftermarket sales. In addition to the benefit of the new launches, our geographic balance and diverse customer base helped offset the overall North American industry production decline.”

So no acquisition and it’s hard to understand the management gibberish, does it mean they opened new plants and factories, or just brought new products to market? Or perhaps just a cyclical business going through the usual peaks? To be honest I wouldn’t conclude that 2009 revenues are abnormally low, I would probably assume these represent more of a cyclical norm and the 2007 and 2008 were actually the anomaly. Gross margin however would probably return to more normal levels of 17.1% (2006) than the current 16.6% which would add $20m to EBITDA.

But I may also expect sales to fall further in the short term – companies usually order car parts on long term contracts which may be why 2009 revenues (which are supposedly depressed) are actually similar to 2006.

But still, lets say under normal conditions a few years out the company is earning at least $4.6bn in revenue on which it makes EBITDA of $330m. It has shown that cap ex of $118m allows it to sustain this level of business but lets be conservative and say $150m is required, which leaves $180m of owners EBIT.

Finally it currently pays $130m in interest, but central banks have just slashed interest rates. If they can refinance it then they can at least cut that to $100m, which is still an 8% interest rate on $1,220m of debt! Finally using a standard tax rate of 35% leaves me with a profit after tax of $53m. If I slap on a standard 8.5 Graham multiple for a cyclical business I get a value of $450m, or $9.33 per share.

Shares trade for $24 and ’12 months ago’ they traded at $1.50 (investors really are rewarded for uncertainty!), so I wouldn’t initiate a position.

I know if I write what happened straight away you will just skip to it without much thought, so I will instead post a follow up tomorrow on exactly how this investment turned out and which of my assumptions were correct/wrong.

This will give you a chance to think it over a bit, maybe when you’re on the train, but think how you would approach the problem and whether you would be more conservative or bullish. Let me know in the comments.

One thing I know about leveraged companies is that being overly conservative punishes the valuation very harshly, which is probably why I tend to wildly mis-value these types of companies given my natural tendency towards conservatism. That’ll be one thing I look at next time.