Another 6 months have flown by and it’s time to report on my portfolio’s performance again. At the end of the first half of 2017 I was in the midst of investing in a large pot of Japanese small stocks and haven’t made many changes to the portfolio since. I had 26% cash but this quickly reduced to 13%, so I was almost fully invested for this half. 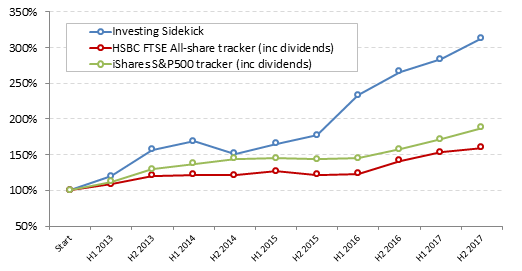 I keep thinking these years of good performance need to end at some point as the stock market cools off but the end isn’t in sight yet. I generally think my portfolio is somewhat uncorrelated to the wider market, given that most of my money is concentrated in relatively few UK small caps, and 25% is now in a basket of Japanese small caps.

Below are my holdings ranked by return to the overall portfolio in the half year. 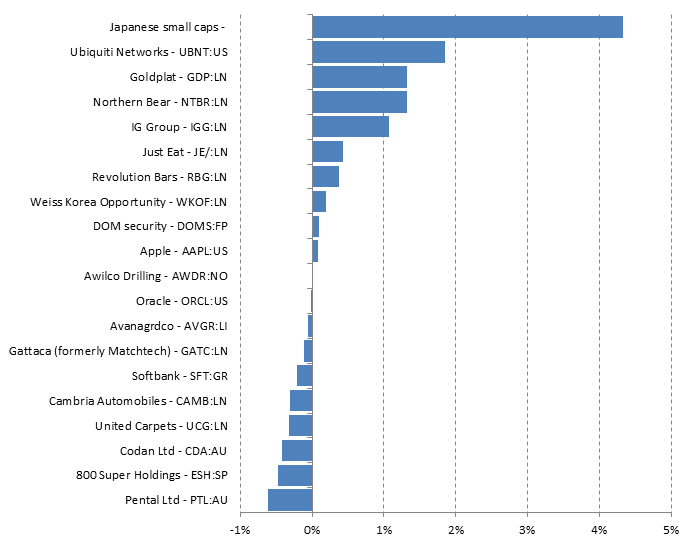 The biggest contributor was the basket of Japanese stocks which returned around 20%, but I still think this is one of my best prospects going forward and is worth at least double what I paid for it. Ubiquiti Networks had a strong year and the share price is up 154% on my purchase price. I’m continuing to hold, as even at a P/E ratio of 23, given its stellar growth I think it is still at a fair valuation and am a long term holder. I will only consider selling if the valuation becomes unrealistic.

Goldplat and Northern Bear also did well, and I would also say they are still attractive investments.

My portfolio is given live on the site, but here it is with position sizes.

I also have two long bets on GBPUSD and GBPJPY to hedge my foreign currency exposure. Given all the macro events going on with the UK at the moment, I have no idea what the currencies will do so I wish to remain as immune as possible.

In the year ahead I’m hoping to deploy most of my cash. I have a long watch list that needs further research and I’m confident there are some gems in there. There are some worries in the small cap market with Brexit looming and hopefully it will continue to present opportunities. For the most part though, the wider market doesn’t seem too worried.