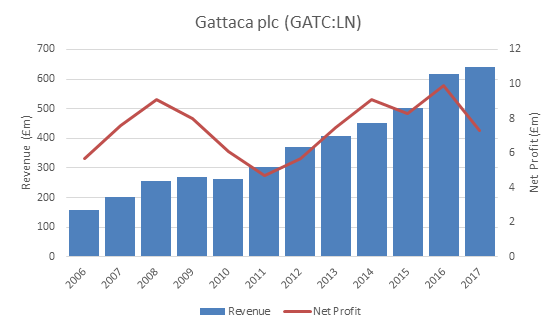 I bought shares in Gattaca (GATC:LN) over a year ago but never did a proper write-up on the company. The shares have been one of the worst performers in my portfolio, and after the company issued a profit warning earlier this month, the shares were predictably hammered. I was down 43% on the position so it was time to do a proper analysis of the company and see if my thesis has changed.

It has a strong, consistent history of revenues and profits. However, despite significant revenue growth over the last 10 years, profits have not really increased.

Recruiting is an industry where there aren’t too many barriers to entry. Gattaca has been growing and consolidating but recent results have started to wane. A similar thing occurred from 2008 to 2011 from which the company rebounded. During 2012 the shares traded at a similar price to what they do now (~200p) before increasing to a high of 600p when results began to improve.

What attracted me to Gattaca was its strong free cash flow generation, which has been slightly higher than net profits over the last 6 years.

The profit warning said earnings would be 15% below “management expectations,” which if consistent with market expectations means EPS will be around 30p in 2018.

Net debt is £37m, or 110p per share, so not insignificant but manageable. I tend to avoid companies that have much debt. This is about as high as I like to tolerate because when cash is a little squeezed it can lead to dividend cuts. And that is exactly what has happened. Dividends have been cut. Forecasts are now for 11.5p per share, which puts the shares on a forecast yield of 5.7%.

There are some things I don’t like about the company, besides the debt. One thing that has concerned me is the increase in shares outstanding, especially in the last couple of years. The company has been offering ridiculous numbers of options, well over 1m every year, which on a share count of 32m is significant, ~3-4%.

It is also too focused on the top line, and will sacrifice margins for the sake of Net Fee Income growth.

The CEO has just resigned, so this could be a positive or a negative. I don’t think much will change, but it could be good to have fresh eyes to look over the cost structure and see if it can be improved. It does lead me to believe there will be another profit warning when the new CEO comes in though. It is typical for a new CEO to ‘kitchen sink’ all the bad accounting practices in his first year so that he can look good in subsequent years.

The investment rested on the assumption that this is a temporary downturn in business, given there are cycles of strong and weak business, and that it will rebound in the next few years. I bought the shares at 357p which in hindsight is probably a fair price. Unfortunately I don’t think there was much margin of safety so lost money when business was weaker than expected.

The question is whether it’s cheap now at 200p. If so I should probably buy more and average down. If not, then I should sell given I don’t really like this as a long term buy and hold business.

Given that I think another profit warning is highly probable with a new incoming CEO, I decided to sell the position. I’ll keep it on the watchlist and may look to pick it up again in future after things have settled.

The generous dividends made up about 10% of the loss on this share, but I’m still down 33% on this trade.

Disclosure: Author has no position in GATC:LN