It’s hard to miss the carnage in oil stocks at the moment, I’m sure many, like me, are tempted to load up on them as oil reaches lows not seen since 2009. Surely this must be overdone, oil at $60 a barrel will not be sustained? Well that may be true, but the question I’m interested in is are fossil fuels going to prove to be a sensible investment long term?

It’s hard to see demand falling, with the world’s population growing and countries developing more sophisticated and efficient economies, fuel will always be required to…well fuel these. Plus the ‘great’ thing about fossil fuels is they are in limited supply, and almost every country in the world has inflation of their currency every year. So in the long term, over say 50-100 years it seems like a no brainer that fossil fuel prices will go up.

With that in mind, it is fairly easy to see a company’s official reserves, be it of oil, gas or coal, and to estimate how long it will take them to extract it all. A harder thing is to predict the cash flows they will receive, but this can be estimated under various scenarios.

I mentioned oil at the start of this article and want to raise a specific point about it. Most of us know commodities go through cycles, as there is a time lag between production coming on line and demand increases. In 2011 we reached the peak of a 10 year bull market in commodities like Iron Ore and Coal, and it would be fair to assume we are now in the bear market part of the cycle. So given that Crude Oil has also had its own bull market for over a decade, shouldn’t that mean we should expect a bear market?

I think no, because the oil industry is different from other commodities in two ways.

Now this is all complicated by political manoeuvres, but I went over that in my post on Legacy Oil so won’t reiterate. We can see the same reasoning also applies to natural gas, and look how quickly the price recovered after the crash in 2011/2012.

So there are some fairly convincing arguments that the price of oil will recover and an investment in the sector now would be profitable. The same goes for other fossil fuels in the long term. But there is one organization that thinks there is big problem with how the market is currently valuing fossil fuel companies. This was highlighted in a report by the Carbon Tracker Initiative called Unburnable Carbon. The report speaks for itself and in my opinion you should read it (it’s not that long). But here is a brief summary of the message:

The elephant fossil in the room

You can probably guess by the name we’re talking about climate change. Before you roll your eyes and close this window, this is important not because of climate change itself (which could be real or not), but because governments are actively signing agreements, which if adhered to, mean that today’s reserves of oil, gas and coal are far in excess of what will be allowable to extract and use.

Consider this, in 2010, the UNFCCC agreed that future global warming should be limited to 2.0 °C (3.6 °F). This was a unique agreement as it was signed by both the USA and China who had been reluctant to address climate change in the past. It is estimated that this leaves a ‘carbon budget’ of 886 GtCO2 to last from 2000 until 2050. This is quite an ambitious target. In the first 10 years the world already used a third of that budget, leaving 565 GtCO2 for the remaining 40 years. That means we need to cut emissions by 30% per decade to meet the target, or 3.5% per year. They are currently still increasing though.

Here’s the problem, the total CO2 emissions of the worlds proven reserves (i.e. they will be extracted & aren’t just empty management promises) of coal, oil and gas add up to 2,795 GtCO2 according to the report. That’s made up of 65% coal, 22% oil and 13% gas. Just the top listed 100 coal and top 100 oil & gas companies alone have reserves equivalent to 745 GtCO2. Companies hold almost 5 times the amount that governments have agreed to release into the atmosphere, yet more come to the markets every year to raise money for exploration and developing new reserves. 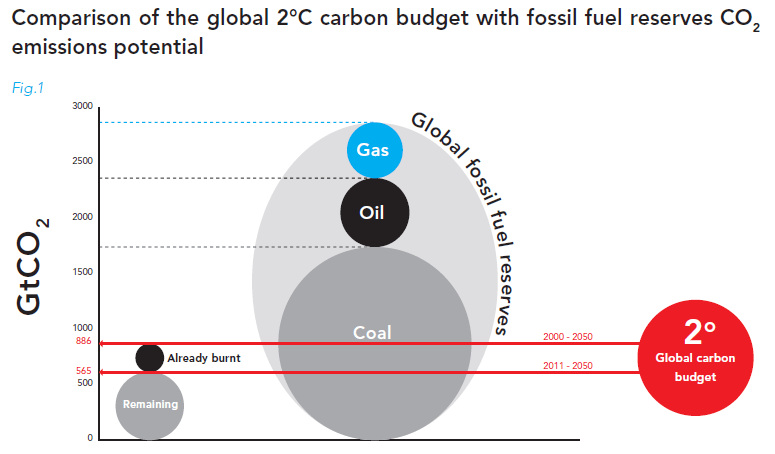 And we need to remember that all of this is only based on proven reserves. There are still probable and possible reserves which many companies in the world are valued based upon. Take BP for example:

What the report doesn’t say

While this report highlights an important problem that markets seem to be ignoring, it also misses some points. Firstly this report doesn’t incorporate the US shale oil and gas boom, which only paints a bleaker picture. Secondly, let’s not forget that these three fuels vary in efficiency. We can see by far that coal is the largest resource in terms of CO2, but that is because it is the least efficient. 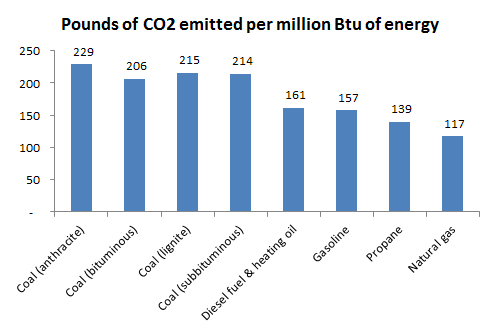 If countries are serious about meeting climate change targets then the easiest short term answer is to switch from coal energy to gas. But it’s not that straightforward. The worlds largest users of coal are India and China, and the one thing they fall short on is natural gas. In fact a lot of the worlds gas reserves are restricted to Russia and the Middle East and relations between them and the rest of the world have been tense. Countries have new shale gas resources to develop like the US has done, but these are not as emission light to extract.

But regardless, from this data it is sensible to expect that coal companies will be hit hardest of all, and gas producers will probably be among the least affected. However given the scale of the oversupply of fossil fuels, none will be immune to significant write-downs if the world is to stick to its CO2 targets.

The biggest caveat to this report is that it assumes the climate change targets will be adhered to. So far no country seems to have taken this seriously, as I said emissions are still increasing every year. The market seems to either be unaware of the problem, or is pretty certain that not only will these climate change targets be ignored, but that governments will allow emissions far in excess of the agreed targets. Now while I find it unlikely the targets will be met in their current form, I’m not so convinced that such a huge excess of CO2 will be allowed.

We also have technological improvements to become ‘greener’, that are available right now. For example nuclear power is almost a must have if climate change targets are to be met. We also have electric cars, but the huge infrastructure roll out required to support them make it unlikely that demand for oil will be affected by this any time soon.

I haven’t put my money into any fossil fuel plays this year and after reading this report I probably wont unless they involve a short lifespan. It is still possible to profit from a short term oil price rebound without the long term risk, either by speculating on oil directly, or investing in drillers such as Awilco Drilling, that are valued based upon rigs that will be out of business well before CO2 emissions become a problem.

Whatever your view on fossil fuels is, I feel the issue this report raises can’t be ignored.