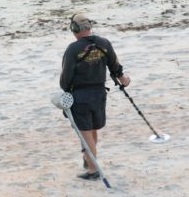 I went over the investment thesis for Codan Limited ($CDA.AX) in one of my portfolio updates in June. Codan is a company that earned $45m in 2013 and now has a market cap of just $140m. I bought shares at $0.78 and since then shares are only slightly ahead at $0.85, so this is still a good investment opportunity in my opinion. This post isn’t to go over the investment thesis again, but to briefly highlight the recent AGM and chairman’s statement, which I think make this investment even more compelling than before.

I previously noted that Codan’s drop off in revenue and profits was due to a combination of political instability in Africa along with reduced gold prices impacting on demand for metal detectors. There were also counterfeits of Codan’s products flooding the market which further reduced demand for Codans authentic and more expensive detectors.

I had attributed most of the problems to the first two reasons, however the Chairman’s address clearly indicates that it is actually counterfeits that were the reason for the poor results. In my opinion this is a lot more bullish for Codan as market demand isn’t as bad as I feared. Counterfeit problems are fixable, demand isn’t. Here are some highlights from the address.

“The underperformance of the company in FY14 was almost entirely due to the dramatically reduced sales of gold detectors into Africa…the overwhelming factor was the severe competition we faced from competitors who copied our brand and stole our technology despite strenuous efforts to protect it.”

“…after substantial investigative work, which has been difficult and time consuming, we identified what we believe to be the major factories producing the counterfeit product in China and successfully had them raided by police. This has resulted in the closure of those factories and the arrest of the company principals who are now in jail awaiting trial.”

The board appear to be cautiously optimistic for the current year, and if the counterfeit problems are being successfully addressed as they are implying then this company should be earning something closer to its $45m 2013 earnings as opposed to $9m 2014 earnings, making it very cheap.