CF Industries is one of the largest manufacturers and distributors of nitrogen and phosphate fertilizer products in the world and I first mentioned it in my ‘Fertiliser Company Comparison‘ article. It is currently selling at a P/E ratio of just 6.8 and generates all of its profits as free cash flow. Daniel Loeb’s Third Point has already announced it holds a position in the stock as it views it as undervalued.

Its core market and distribution facilities are concentrated in the midwestern United States (the so called corn belt) and other major agricultural areas of the U.S. and Canada. It also exports nitrogen fertilizer products from Louisiana manufacturing facilities and phosphate fertilizer products from Florida phosphate operations through its Tampa port facility. It mainly sells its products to industrial customers. It also owns a 75.3% interest in Terra Nitrogen Company (TNCLP).

Nitrogen accounts for 83% of revenue, and phosphorus the remaining 17% (no potash business). As I explained in my article ‘How to value a fertiliser company‘, nitrogen fertilisers use lots of natural gas, hence it makes up 70% of total costs of sales for CF’s nitrogen fertilisers.

The US is one of the cheapest places to make urea (a nitrogen based product) in the world as the chart below shows. This is due to cost advantage of natural gas there. 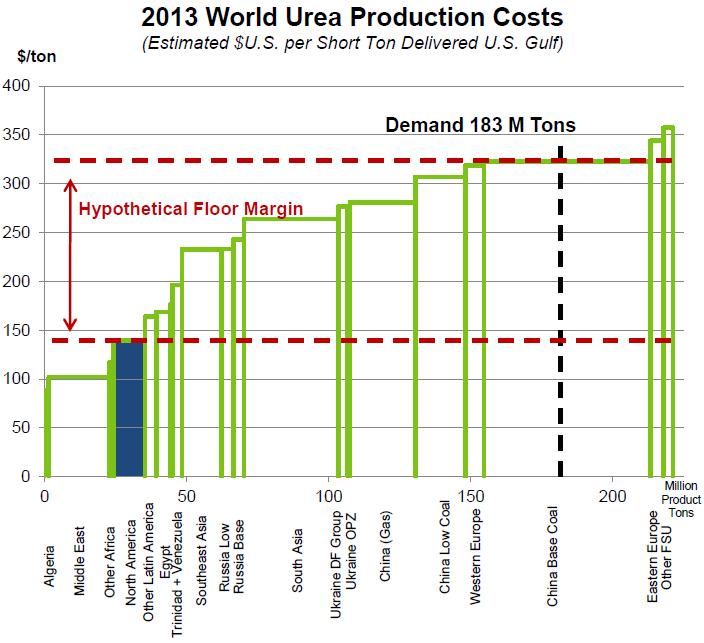 The urea global floor price is estimated to range from $320 to $340 per ton based on Chinese and Eastern European production. With natural gas at $5 the typical US producer has production costs of $180 per ton leaving US producers a huge margin. It’s important to note however that this relies on natural gas at $5, and higher gas prices have been seen in the past which is why CF has a lower 5 year average EBIT of 37% than its current EBIT.

As you can see in the diagram below, under worst case conditions the companies operating profits could halve, but it would still be highly profitable! 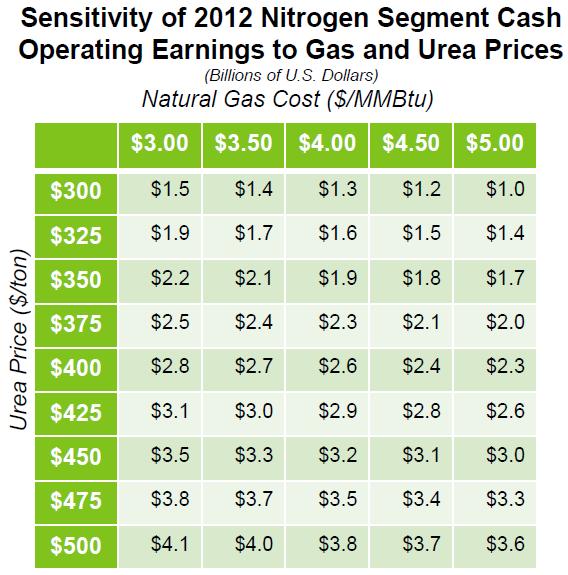 The US supply of gas is estimated to last for 100 years, with an enormous of amount of it economically recoverable with gas selling at $5/MMBtu.

Liquid Natural Gas (LNG) exports is one fact which could increase the price of gas if it allows the US to sell more gas abroad, however there are significant infrastructure expenses associated with LNG not to mention operation. This means it’s almost twice as expensive on a cost basis hence domestic prices should remain low.

Phosphate demand globally is expected to increase over the next few years however CF is expecting international competition to weigh on its exports.

CF plans to dramatically increase its nitrogen production in the US given the outlook for natural gas prices and great returns on investment available. Its thesis is that North America imports almost 40% of its nitrogen and an increase in supply in the US, while not necessary when looking at global supply and demand, will displace these imports. Many other companies have had the same idea but although numerous projects have been announced for the next three years, historically only about 50% to 60% come onstream. We have seen announcements from Agrium and other fertiliser companies that are either delaying or cancelling planned expansion.

CF’s $3.8bn in plants will be among the first to come online which gives them a first mover advantage and is likely what scared competitors out of expansion. It will increase gross ammonia capacity by 26%, UAN by 28% and urea by 73%. Overall this will increase capacity by 34% and is expect to come online by 2016. The US currently imports around 30% of Nitrogen demand and this is what CF is targeting with its added capacity. It will not be reliant on exporting the additional product and that is important.

CF is dependent on the US corn belt which means it is heavily dependent on corn, its prices and government subsidies. Because corn needs a large amount of nitrogen it leads to increasing demand for nitrogen fertiliser. But if corn becomes less economical then farmers may decide to grow an alternate crop such as soy beans instead. The graph below shows that the costs however are still substantially in favour of corn. 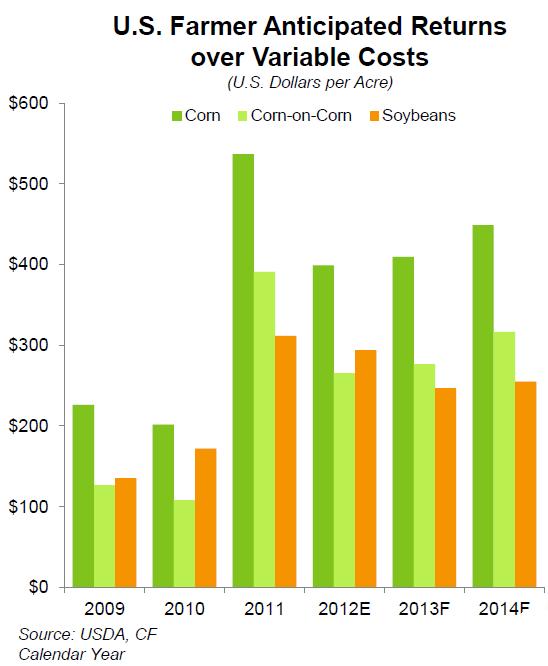 But its location is also a major strength. It has the lowest inventory days in the industry (it owns a majority stake in TNH) as I showed in my industry comparison post. That means it is getting its product to customers quickly and demonstrates its advantage over competitors – low transportation costs and less time spent holding and transporting inventory.

It also has access to direct ammonia pipelines which allow cheap and fast transportation of finished products.

Cheap Russian imports are currently prevented by anti-dumping rules in the US, which imposes a 65% tax on them. There are suppliers applying to export to the US from Russia without the penalty and if it is granted it could dramatically increase Russian exports to the US.

Reliance on corn – as explained above, if government assistance is reduced this could hurt demand

Environmental regulation – currently very strict and any changes can result in increased costs, or even loss of permits.

I tried to value CF Industries based on its expansion but the whole process involved too much hypothesis and distant estimates so I have decided to do it on the current business. For any expansion I’ll use crude estimates and it will come as more of a bonus.

For a floor value I will use natural gas prices of around $5 and floor urea prices which the company kindly provided us with in the second table above along with corresponding operating earnings. That gives operating income of around $1.5bn for the Nitrogen segment. The Phosphate segment is smaller and is on track to give an operating profit of $100m. That is $1.6bn operating profit in total which roughly equates to $900m net profit. Given the downside protection at this price point and the current interest rate environment an 8% discount rate could be appropriate. But even with a 10% discount rate that is valued at $9bn to $11.2bn at 8%. And that gives no consideration for the current environment where natural gas prices are at $3.50 so net ‘floor earnings’ are more like $1.3bn and could go up to $1.8bn with some recovery in pricing. These extra earnings deserve a higher discount rate however, I’d say 15%-20%. So capitalising $0.4-0.9bn additional operating income gives a range of $2bn – 6bn. Combined with earlier estimates gives a total value of $11bn – $17.2bn.

CF is currently valued at $11.2bn and so close to the ‘floor value’ using reasonable discount rates. But given that natural gas prices are not at $5 which is what the floor value is based on I think this provides us with some margin of safety. If natural gas prices do go to $5 then we are getting a return of 10% per annum on a stable free cash flow stream. The company is already buying back shares and has authority to do more. It also has lots of capacity on its balance sheet for more debt to fund the share buybacks, enhancing returns to shareholders even more.

CF Industries does have some downside if there is an adverse movement in natural gas prices and/or the price of its products. It has competitive advantages being based in the US and in the heart of the major US farming lands and its plants have access to numerous transportation services making it easy to export as well. The US has sustainable low natural gas prices (although they won’t remain as low as they have been in the last couple of years). This means it has good operating margins even if fertiliser prices reach global ‘floor’ prices where foreign companies are barely breaking even. But it isn’t reliant on exports so foreign improvements in costs wont impact it as much; it has the transport advantages of being next to its customers.

There is one other factor which I like here though. The company has around $2bn of share repurchases authorised left for 2013 and has been buying back shares aggressively. This will act to leverage the investment. I have seen it before with Deckers Outdoor and IBM, even when results come in below expectations (even my own) share buybacks give a good return to shareholders and makes losses much less likely.

Saying that however the share is selling at the bottom of my valuation range (but that is based on a ‘bad’ scenario) so although I see some margin of safety with current gas prices, it isn’t a deeply undervalued business. I’m long CF but it is a small position, only 3% of portfolio. If the share price drops significantly I will be looking to increase my position.