In my last post I said I would go through the blog recommendations of a select number of blogs since January 2012 and monitor performance of a mechanical portfolio that follows their buys and sells.

The blogs I began following were:

(I removed OTC adventures as it only really covered over the counter stocks).

Firstly I’ll start by saying I completely underestimated what a mammoth task this was. It has taken around 8 hours of solid work just to do 2012. Getting historical quotes on companies, along with exchange rates and making a virtual portfolio which I could get historical values of and including dividends was a nightmare. It got even more complicated when the portfolio ran out of cash and I realized none of the holdings had gone up by much making selling decisions difficult.

The full list of transactions so far can be found here.
https://docs.google.com/spreadsheets/d/1ydhVgfhgF4r4IaUDdObvpLW0hKjzl6zeVAWg-UtQbuI/edit?usp=sharing 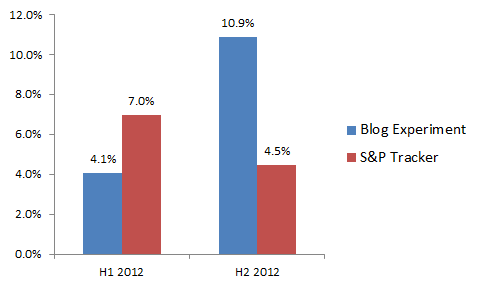 At the 6 month mark the portfolio was fully invested with 20 stocks at 5% position sizes. The value was $104,125 representing a 4.1% increase. This compares with the S&P tracker gain of 7.0%. That isn’t too bad considering it obviously takes a while for the cash to get invested in the market, and ideas don’t usually pay off so quickly.

At the 6 month mark it became clear that the 5 blogs were generating far too many ideas for my portfolio to handle. Already fully invested it would have required selling 2-3 positions every month after mere 5-10% gains. I therefore removed two of the blogs, Barel Karsan and Value & opportunity.

This decision was based partly on performance of the picks to that date, but also how well the other writers kept readers up to date on their portfolio, which made copying them easier.

I also reduced the default position size to 3% to make room for more ideas.

Individual results were mixed however, the full spreadsheet has individual realised gains/losses, the largest losses were on Barel Karsan positions that I liquidated when cash was needed and no holdings were close to target. It probably wasn’t the best time to sell but most have not performed that well since either.

I will keep going up to 30 June 2014 and post the final results hopefully next week. I was hoping to do it all in one post but had underestimated the sheer scale of the task. I do plan to keep this going long term, just to see how it does, and will probably add another couple of blogs to the list from 2014 that produce good ideas but in a manageable quantity.

3 thoughts on “The Blog Experiment”