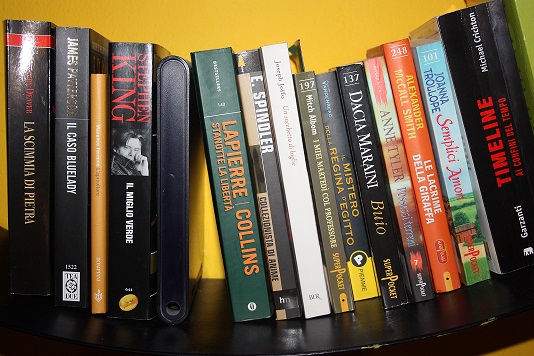 Barnes & Noble is making big losses on paper and looks pretty worthless at first glance, but headline numbers are masking two very profitable segments worth more than the current market cap. The company also has a 26% shareholder as its chairman and completely separate management teams for different segments, which suggests a separation of the businesses is a very real possibility.

For my American readers, they will probably be familiar with the retailer Barnes & Noble (NYSE:BKS) but for the rest of you, here is a brief description. Barnes & Noble is the last remaining national book retailer in the US. The competition has been driven to bankruptcy by a combination of recession and the rise of ebooks.

BKS has its own slice of the ebook pie with its Nook readers and ebook retail store. Unfortunately this isn’t a positive as the business makes heavy losses and has so far consumed all the profits of the other, much better performing, segments. Along with this it has a classic retail segment and also a specialist college campus retail segment which mainly deals in text books. BKS has been written about numerous times on Seeking Alpha so I wont repeat the main thesis behind the bulls and bears, instead I will simply add my opinions and thoughts to the debate.

I suggest you read both the bull case, and this well written bear case which has some interesting information on the market as a whole.

I would agree with the main argument of the bull case which is that BKS is worth more than its current market cap as a sum of its separate parts, if we assume no segment can have a value below 0. I also agree that the company has a good chance of splitting up into segments. It already has a unique position in that it has no overall CEO, it has two. One is in charge of Nook Media and the other in charge of Retail. On the Q1 2014 conference call an investor asked explicitly about the plans for the failing Nook business too, see the reply here.

But even the segment reporting isn’t enough to truly understand how the retail of books is doing. Comparable store sales declined 3.4% in 2013, yet if you exclude NOOK sales from retail then the comp figure is actually +0.1%. And that is in comparison to 2012 which saw huge success with the 50 Shades of Grey and Hunger Games trilogies.

The picture is not as bleak as it initially appears apparently. There is also evidence that the growth in ebooks is slowing, as all those that were open to converting now have an e-reader, and we are left with sales to people that prefer physical books. I still expect a long term down trend as younger people will prefer ebooks, but the magnitude of the shift should be smaller now.

But I think the bull case has some major flaws with it. Firstly doing a sum of parts to reach a valuation is on the basis of an instant split or spin off of the retail segment. This is unlikely to happen quickly, management is keen to make the business work together and will probably be satisfied if the Nook Media segment starts to break even. The valuation needs to make sense even if a separation does not occur.

Secondly, and more fundamentally, the bull case uses the college retail segment profits and capitalises them to reach a valuation. A deeper look at the companies financial statements however shows that college retail is actually a part of the Nook Media segment. Given that both Microsoft and Pearson have already made investments solely in Nook Media, there is no way this will be separated and put with the retail segment. It is designed in a way that the profits from college retail will support the loss making Nook business. Microsoft isn’t really stupid enough to put money into a business that just loses money hand over fist.

So I think the only valid way to value BKS is in two segments, not three. Retail (not including college) and Nook Media.

Given the long term goal of Nook Media is to merely break even, and it’s still struggling to achieve that, I dont think it has any value.

The Retail segment however made about $165m in operating profits on average over the last few years. After tax that is about $107m. Depreciation, at around $100-150m is higher than maintenance capital expenditures of about $75m (according to the Q4 2013 conference call) so free cash flow for the segment is closer to $130-180m.

BKS has quite a complex capital structure, it has convertible preferred stock, with some in the Nook Media subsidiary too. As I have assigned it no value, I will not account for Nook Media preferred stock. So there would be 70,775k shares outstanding if non-Nook preferred are converted, which means Retail has free cash flow of about $1.84-$2.54 per share. With shares currently priced at $14.68 this represents a multiple of 5.8-7.8. Benjamin Graham often said a multiple of 8.5x earnings was appropriate for a no growth business, but these days even these companies can sell for a multiple of 10-13. BKS has traded as high as $23 in the last 12 months but only as low as $12.59.

Sadly that isn’t the end of the story. BKS is being investigated by the SEC over what could be a mistatement of segment reporting. It is based on its accounting practise with regards to IT expenses. This could be increasing or decreasing the reported profits of Retail, and its not possible to figure out which way or by how much. If it is a material effect this will have a big impact on the valuation so is a big risk.

This also raises questions with me regarding how they account for the segments. The NOOK business sells units to retail, yet has had negative gross margin in some years. Could this be artificially inflating the profits of the retail segment?

The truth is I dont know, but to me, given they are seeking outside investment in the NOOK business, and have already secured it from Microsoft and Pearson, if anything they should be trying to make the financials of NOOK look better, not worse.

I am still undecided on this stock. The price looks like it has a margin of safety even if all the preferred is converted and the retail profits continue to be erratic. Also the Nook business has been valued at 0 in my valuation, but other companies have been willing to invest money into it which value it at an equivalent of $1.8bn. That is double the current market cap alone.

I do believe the Nook Media segment could reach break even point in the next year or two which would be a big catalyst for the shares to be rerated in my opinion. Also Microsoft is still making cash payments to Nook Media which should mean cash flow from Retail is no longer being haemoraged and can be given back to shareholders. Having a 26% controlling shareholder is definitely a plus too for shareholder value creation. The current CEO arrangement suggests to me a spin-off is on the cards.

But the risks, particularly in accounting are very real so I will be giving it some more thought, and may or may not initiate a position over the next few days.