It’s been a while since I’ve gone over some actual stocks on here, having a low cash balance in my portfolio sort of removes the motivation to research new companies. But it’s about time I got back to the AIM IT Project. As usual here is the spreadsheet of the stocks I’ve gone over previously.

GLIF is a bit different from the Investment Trusts I’ve reviewed so far. It invests in loans to small businesses in the UK and US. In the past these were originated by third parties so GLIF was more of an ‘income fund’, but in 2013 GLIF started to move towards originating its own loans through providers it has a financial stake in. These new platforms are things such as peer to peer, and have light regulation at the moment. It is expected that regulation, and hence the burden on companies like GLIF, will increase in the future.

Most of its balance sheet is in Collateralised Debt Obligations (CLOs), from when it was a passive investor. Ever since the financial crisis I have been very suspicious of such pools of loans as it is so much harder for an investor to assess their creditworthiness. The company wants to get rid of these and is looking to spin them off into a separate entity.

Looking at the historical financials, the company’s past isn’t too rosy. Net Asset Value (NAV) per share seems on a downward trend. 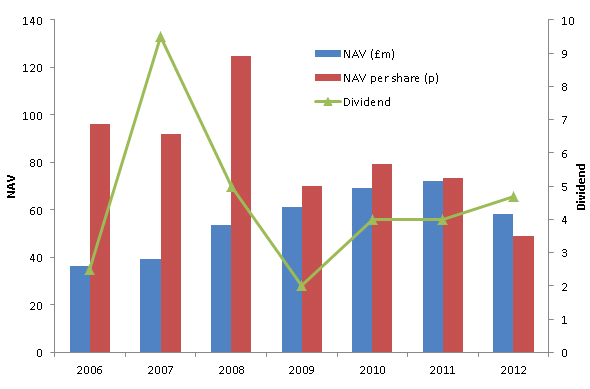 To invest in this company requires some faith that the new direction the business is taking will be successful. It doesn’t have any track record apart from its investments in CLO’s. But I do like the sound of the current CEO as he clearly expresses his focus on returns on equity and derides competitors for growing for growths sake.

It is too much of a young company for me to consider investing and those CLOs on the balance sheet are difficult to value. Without anything else to go on I’ll take them as worth book value. The company did recently manage to sell some CLOs at book.

I say it a lot that the charts in the AIM IT Project usually show a decline over time, but this one has to be one of biggest charts of value destruction I have come across so far! This (now) tiny £1m company invests in other small companies in the natural resources sector. After a recent share sale it has about £1.1m in equity with enough cash to see it through for a couple of years as admin expenses run at £300-400k per year. The current Executive Chairman was previously at Lonrho plc, which judging by the share price history, saw a destruction of investor capital until the company was finally acquired in 2013.

There isn’t much more to this company, its assets are at least listed companies so worth book minus the years operating expenses.

This is an interesting one, in May 2014 EWG underwent a reverse merger with an affiliated company. It is an asset manager with £0.8bn under management, quite substantial for a little £13m company. It calls itself the ‘fastest growing wealth management group’ and to keep that title it seems to be acquiring other companies where it can.

Before the reverse merger the company made profits of around £1.3m a year and had a net asset value of £8m. The reverse merged company however was making losses of around £1m a year had negative book value of (£151k). This seemed to be because of very generous pay to the wealth managers, the ‘admin expenses’ were almost equal to total revenue in the last few years.

I don’t really want to give this stock a valuation, it is still a bit unknown what the consolidated group will earn in the future. But if the status quo continues then apart from a few saved costs from being consolidated the group will probably about break even and I don’t expect book value to increase much over time.

And finally, an investment company that you actually would want to have been invested in over the last few years! From 75p to a high of 550p investors have profited handsomely from this company. This is what company says about itself

“Polar Capital Holdings plc is a research driven investment management company providing a highly entrepreneurial environment for outstanding portfolio managers within a structure that offers a level of marketing, administrative and operational support normally found in much larger organisations.”

They offer a selection of funds spread globally which have won awards such as Fund manager of the year and Investment company of the year from two investment publications. 36% of the company is owned by its staff and founders. It IPO’d in 2007 and couldn’t have picked a better time (better for them – worse for investors) as the share price went on to fall 85%! But long term holders today would still be up almost 100% on the IPO price thanks to the stocks spectacular run.

Assets under management (AUM) are $13.2bn and it earned £25m in FY2014. That was up from £12m profit on $7.2bn AUM in FY2013. Such momentum in increasing AUM is reflected in the company’s valuation, with its market cap sitting at £378m. The company does have £90m of cash and investments on the balance sheet which explains some of the high value. The graph below shows the progression in AUM and diluted EPS over the last few years. Obviously the period 2007-2009 was difficult but the group still remained profitable. 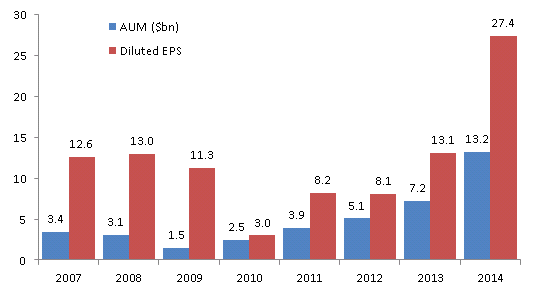 The chart shows just how great a year 2014 was. The valuation here is high with shares price at 430p and that is based on 2014’s abnormally high earnings. Who knows if this will continue.

What we do know is that in the future there will be another 2008 – some sort of crisis in the market where investors run for cover and withdraw funds from their investment managers. POLR saw its AUM more than halve from 2008 to 2009. That appears to be the time to buy shares like this and secure large returns.

Knowing this I find it hard to justify POLR’s current valuation, for me a more conservative valuation would be around 15x historical earnings, which if I take to be 13p gives a value of 195p. I don’t have much confidence in this valuation though – it is a sort of middle ground between projected good times forward and foreseeing doom around the corner. In reality it will be one or the other which means my value is either an underestimate or an overestimate, my ‘middle ground’ scenario is never actually going to happen.

Because of that I’m not going to give this stock an official value, but I am adding this to the watch list. It looks like great stock to buy in times of crisis though I will give one word of caution – this company is fairly liberal with its granting of stock options which will do harm to holders in the long term.

Disclosure: Author holds no positions in any of the stocks mentioned.