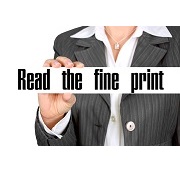 I’m sure by now most have heard that Buffett’s latest letter to shareholders has been released. If you haven’t read it, you have probably already read articles on it. So I wanted to post here, in brief, some quotes from which I drew some subtle implications that others may not have picked up on when reading. This is by no means a comprehensive review, there are other (more obvious) lessons to learn from it so I recommend reading it in full if you haven’t already.

“we have added a new set of data – the historical record of Berkshire’s stock price – to the performance table on the facing page.”

I was a little surprised to see this included in the letter to shareholders. Buffett, who has always believed he has an edge over the market, is now using the market’s valuation to judge his performance. Could this have anything to do with the fact that BRK book value growth has now failed to beat the S&P 500 for 3 straight years? I think it could. But I think it reveals an important point – Buffett thinks Berkshire’s stock is fairly valued at the moment. I don’t think he would choose a year in which BRK stock was under or overvalued to introduce this measure to the annual report, for obvious reasons. It also highlighted something else very interesting to me.

At first glance this seems like an insignificant difference, what difference does 2% really make? Well the answer is a lot over 50 years.

Your investment with gains of 21.6% is now more than double what it would have been with gains of 19.4%, a truly striking revelation once again of the powers of compounding.

“Depreciation charges, we want to emphasize, are different [to amortization]: Every dime of depreciation expense we report is a real cost. That’s true, moreover, at most other companies. When CEOs tout EBITDA as a valuation guide, wire them up for a polygraph test”

We all know the limitations of using EBITDA, but Buffett is taking it one step further, and questions the integrity of a management that touts it. So rather than ignore such statements when researching potential investments, as many of us do, instead note what it is saying about the one making the statements.

“A few, however, have very poor returns, the result of some serious mistakes I made in my job of capital allocation. I was not misled: I simply was wrong in my evaluation of the economic dynamics of the company or the industry in which it operates.”

Here Buffett admits he has made many mistakes, and the lesson for me is – if he does it then you can guarantee that we all will too. With this in mind, we need to protect ourselves from our mistakes. The first way to do this is by diversification. I know many investors get market beating returns by making concentrated investments, but I am a proponent of diversification.

When I first started investing I would often take 20% positions in stocks, to say it was foolish is an understatement. Some of these investments were mistakes, and it was only by chance that I managed to get out without significant losses. I may appear a hypocrite when I have 25% of my portfolio in a single stock (Craven House Capital), but it is precisely because of this position that I would hesitate to ever put more than 10% in a stock again. I like to think I have a strong stomach for market swings, but having 25% of your portfolio in a micro-cap stock that swings in value by 50% over just days really gives you a lesson on how strong your stomach really is. It isn’t easy to block out the irrational fears and doubts.

The second way to protect from mistakes is Margin of Safety. If you think an investment is worth $1, then will you buy it for 80 cents? That doesn’t leave much room for error. If it’s only selling for 30 cents however, even if you are wrong by a factor of two you have still bought below intrinsic value.

“We are eager to here from..businesses that meet the following criteria:

Demonstrated consistent earning power (future projections are of no interest to us, nor are “turnaround” situations),”

I’ve written previously about what Buffett says on turnarounds, and will be doing a longer post on this in the future (it’s a work in progress) but this is an interesting requirement from him. Buffett has access to some of the best managers in the world, if there is anyone in a good position to deal with a turnaround it is him. Yet he simply isn’t interested. It is nothing new to him, he tried it many times during his early career, so does this disinterest signify that he views turnarounds as unattractive investments in general? In my opinion, yes, so we should question whether we ourselves should be investing in turnarounds.

Buffett goes on to talk about his initial purchase of Berkshire and then another textile mill, Waumbec Mills, which would have substantial ‘synergies’ with Berkshire. Maybe this has scarred him from turnaround investing altogether. This also leads onto another quoteworthy statement:

“As a director of 19 companies over the years, I’ve never heard “dis-synergies” mentioned, though I’ve witnessed plenty of these once deals have closed.”

“Since the per-share earnings gains of an expanding conglomerate came from exploiting p/e differences, its CEO had to search for businesses selling at low multiples of earnings. These, of course, were characteristically mediocre businesses with poor long-term prospects.”

In a lesson about company acquisitions, this quote stands out for other reasons. Here Buffett is quite pessimistic about companies with low P/E ratios, categorizing them as mediocre. So remember this when running your stock screen for low P/E stocks. Would you be better searching in the 15-20 range but looking for outstanding companies?

Buffett often speaks of his best managers, as people that are well beyond retirement age, independently wealthy and work because they enjoy it. Imagine if these companies were spun-off, and the CEOs were suddenly subjected to analysts and shareholders. I think a lot of them would retire and any new CEO would likely be worse at running the business.

Thus, if BRK ever starts to spin off assets in a meaningful way, I would not want to be left holding them for the long term.

Buffett once called derivatives ‘weapons of mass destruction’, however this quote shows how the market has moved on. 2008 revealed just what can happen when these contracts aren’t backed by reliable counter-parties. It is good to see that the market is apparently operating in a much more cautious way now, suggesting a further financial crisis will not blow up because of these contracts like that last one.

Disclosure: Author has no position in BRK