It’s that time of year again, and hard to believe it’s been 2 years since I started this blog. Time sure does fly. The second half of 2014 in the markets has been very interesting, unfortunately for my portfolio that wasn’t a good thing. Overall my portfolio was down 10% in H2 2014 compared to -0.7% for the FTSE All share tracker and +5% for the S&P 500 tracker. My portfolio is 75% in the UK so the FTSE is the closest benchmark, but given how easy it is to invest in the S&P and hedge currency I aim to beat both benchmarks. 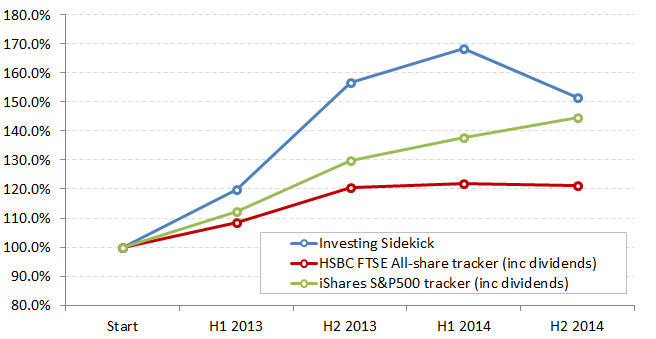 I tend not to focus too much on my overall result as my Craven House Capital position is 27% of my portfolio and influences it heavily; being a nano-cap its price fluctuates greatly. Excluding this my portfolio was down 4% so still an under-performance of my benchmarks.

There are three main reasons for my under-performance:

Firstly the Russia situation, I don’t think there was any way this could have been predicted, and I did use a 20% discount rate in my valuation to account for the risk in this part of the world. Unfortunately for me the worst happened, Ukraine’s currency has tanked, and even some of Avangardco’s assets have been seized by Crimea. The company will be lucky to break even as long as this continues in my opinion and will have a harder time paying back its debt which is denominated in foreign currency. Considering I bought it at a P/E ratio of 4 and well below book value, it was hard to see downside. Clearly it was there though, -80% speaks for itself. I am happy to hold this longer term, but I will not be adding to the position as I consider it a high risk holding at the moment.

The oil price collapse has hit drilling shares hard. Awilco was already high risk with only 2 rigs it leases out, and now when the contracts expire in 2015/16 the market clearly doesn’t think they have much chance of getting new favorable ones. I almost sold this position near its high, unfortunately my order was too ambitious and didn’t get filled and the stock is now down 45%. I would like to think that was astute timing on my part but truthfully it’s just random luck, I didn’t predict the carnage that followed. Nevertheless I will be learning a lot from that mistake, I wont be greedy for a few extra cents again. I will put this in the ‘should have done better’ pile. Again I am content to hold onto this but wont be adding to the position given its high risk nature.

This holding is one where I not only made a huge error in my initial analysis (over-estimating book value considerably) but I also made the mistake of not selling the stock when I realised the error. The management of this company has so far proven to be far from ideal to put it nicely. I’m not happy about this position, but at this price I think it’s worth holding on to. And as you may by now guess, I wont be adding to this position.

With the negatives out of the way, let’s focus on some positives. I had no big winners in H2, but Apple, Pental and Boom Logistics each contributed double digit gains. My exit from the Emeco position (an Australian mining equipment lease company) was with hindsight a wise one, the stock is down 45% since I sold. I replaced it with Boom Logistics which is up 17%, however I recently reduced the position size as I think the risk of a prolonged bear market in commodities is a real one. I also exited Berkshire Hathaway and JD Sports in H2 to realise gains, though the shares have gone up even higher since I sold.

Despite the performance I am quite happy with my portfolio at the moment. Here are what I think are the best prospects for 2015.

I’m currently down about 35% on my purchase price, but things are going well for the company and this is a holding I actually have averaged down on. The gold price has shown some stability, and the company is operating profitably. If not for the loss early last year, it would be quite obvious this company is trading at a very low P/E. With a market cap of under £6m, yet run rate operating profit of £1.4m it is definitely cheap and one of my biggest positions at 7.2%.

In H2 this fund lost all the gains it had made in the first half. South Korea is attractive on a valuation basis, and this fund invests in preferred stock that is trading at a discount to common. It seemed like a no-brainer to me, hopefully the market will wake up and realise a 40% discount from preferred to common is excessive. Voting stock (the common in this case) doesn’t really warrant such a premium in my opinion. The fund trades at an overall P/E of holdings of 7.4.

This is a new position that I haven’t yet gone over on the blog. The thesis is simple though, Russia is probably the cheapest stock market in the world, its economy is in danger, and its currency has been ravaged. Fear couldn’t really get any worse, so now is the time to be greedy in my opinion. Long term I think the political environment will stabilize and I wanted exposure to this. I also wanted more exposure to upside if the oil price stages a recovery (at some point), which I believe it will but not to over $100 a barrel (my reasoning is here). But I don’t want to choose individual stocks, I want blanket exposure.

I chose a leveraged tracker based on derivatives, the Direxion 3x Russia Bull tracker ($RUSL), which is an unusual choice for me and probably most value investors. The reason I went with a leveraged fund is that I want the upside of a recovery but without committing much capital to it. The tracker is one of a pair, the 3x Russia Bear being its partner. It’s not hard to see how they both make money from one another, so counter-party risk is tolerable. This position currently takes just 1.3% of my portfolio, but if I am correct and the Russian market recovers that will soon balloon to around 8%. Given the leveraged nature though, if I am wrong that entire 1.3% could be gone. I am happy with the risk/reward balance.

This investment trust is now de-listed and will liquidate. Conditions couldn’t be better to sell its largest holding, a private shareholding in AnchorFree, a tech company that provides VPNs. It finished trading at a significant discount to book, but it all depends on the private sale of this large holding. The aim is to liquidate by March 2015.

As I said, I am happy with my portfolio as we go into 2015. Craven House Capital has been increasing its book value per share nicely and will continue to do so. I don’t expect this to trade at book value in the year ahead except for freak intra-day occurrences like what happened in 2013. If that does happen again I will significantly reduce the position at just below book value, but it’s not likely to happen.

I wish I had more exposure to oil but I have so far not seen anything attractive, and I do not want to speculate on the price of oil itself. For now Awilco Drilling and the Russia tracker is my exposure, though they are more exposed to other risks at present.

My cash level is 16% and I am looking to buy new positions. I have a backlog of unread investment theses from various bloggers over the last 2 months as well as my own screens, so expect to find something soon. For now, this is my portfolio.

5 thoughts on “2014 review and portfolio update”